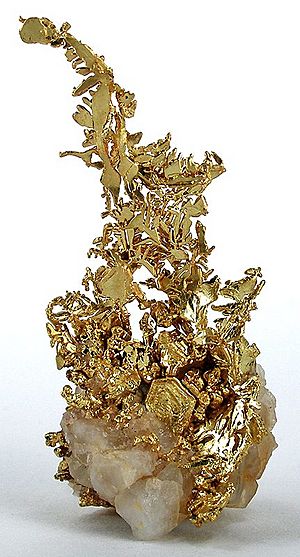 Tuolumne County ( "To All o' Me", with a silent N), officially the County of Tuolumne, is a county in the U.S. state of California. As of the 2010 census, the population was 55,365. The county seat and only incorporated city is Sonora.

The northern half of Yosemite National Park is located in the eastern part of the county.

The name Tuolumne is of Native American origin and has been given different meanings, such as Many Stone Houses, The Land of Mountain Lions and, Straight Up Steep, the latter an interpretation of William Fuller, a native Chief. Mariano Vallejo, in his report to the first California State Legislature, said that the word is "a corruption of the Indian word talmalamne which signifies 'cluster of stone wigwams.'" The name may mean "people who dwell in stone houses," i.e., in caves.

Tuolumne County is one of the original counties of California, created in 1850 at the time of statehood. Prior to statehood, it had been referred to as Oro County. Parts of the county were given to Stanislaus County in 1854 and to Alpine County in 1864.

According to the U.S. Census Bureau, the county has a total area of 2,274 square miles (5,890 km2), of which 2,221 square miles (5,750 km2) is land and 54 square miles (140 km2) (2.4%) is water. A California Department of Forestry document reports Tuolumne County's 1,030,812 acres (4,171.55 km2) include federal lands such as Yosemite National Park, Stanislaus National Forest, Bureau of Land Management lands, and Indian reservations. Notable landforms in the county include Table Mountain.

Special districts in Tuolumne County include:

Tuolumne County Transit bus routes radiate from Sonora to serve most of the county. In Columbia, a connection can be made to Calaveras County Transit. Yosemite Area Regional Transportation System (YARTS) makes a single daily round trip from Sonora into Yosemite Valley during summer months only. YARTS is set to begin a second daily round trip in June 2013. For details visit www.yarts.com or tuolumnecountytransit.com

Columbia Airport and Pine Mountain Lake Airport are both general aviation airports located in the Southwest and Northeast corners of the county respectively.

The population ranking of the following table is based on the 2010 census of Tuolumne County.

All content from Kiddle encyclopedia articles (including the article images and facts) can be freely used under Attribution-ShareAlike license, unless stated otherwise. Cite this article:
Tuolumne County, California Facts for Kids. Kiddle Encyclopedia.