Columbia is a census-designated place (CDP) located in the Sierra Nevada foothills, in Tuolumne County, California, United States. It was founded as a boomtown in 1850 when gold was found in the vicinity, and was known as the "Gem of the Southern Mines."

The town's historic central district is within the Columbia State Historic Park, which preserves the 19th century mining town features. The U.S. historic district is a National Historic Landmark District and is on the National Register of Historic Places.

Columbia is located along State Route 49 just north of Sonora, at an altitude of 2,139 feet (652 m). Wired telephones in Columbia work out of the Sonora central office.

According to the United States Census Bureau, the CDP has a total area of 6.0 square miles (16 km2). Only 0.31% of the total area is covered by water.

This region experiences hot and dry summers, with no average monthly temperatures above 90.1 °F. According to the Köppen Climate Classification system, Columbia has a warm-summer Mediterranean climate, abbreviated "Csb" on climate maps. 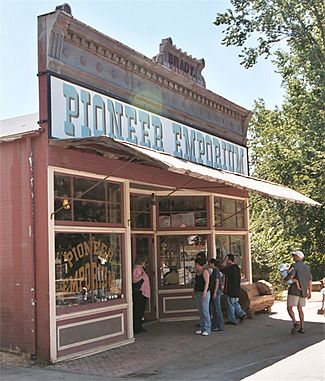 The original indigenous people in the Columbia region were of the Miwok.

Rev. John Steele wrote about his time in the gold rush era and about the "Mi-wuk" of Columbia in his memoirs In Camp and Cabin.

Within weeks of finding gold in the vicinity of Columbia, thousands of people arrived and the population climbed to 5,000. By 1852, there were 8 hotels, 4 banks, 17 general stores, 2 firehouses, 2 bookstores, 1 newspaper, 3 churches, and over 40 drinking/gambling establishments. Between 1850 and the early 1900s, $150 million in gold was removed from the surrounding hills.

In 1851, the local community brass band, a popular institution, greeted the arrival of the first "white woman" in town. Columbia had five cemeteries, including a Boot Hill, where burials were made without markers.

In 1854, Columbia's first fire destroyed 6 city blocks. The town was rebuilt using brick with iron construction materials. In 1857, another fire burned down nearly everything else, except the brick buildings. The Columbia one-room school house was built in 1860, renovated in 1872, and finally closed in 1937. It was purchased by the state of California for $1 in 1947, and incorporated into the historic district park.

By 1860, the gold mined in Columbia was diminishing rapidly. The only land left to mine was in the city itself. Miners dug under buildings and tore down houses to get at the gold beneath the city. Copper deposits were found in the area, with the nearby town of Copperopolis experiencing a boom. The bricks from the destroyed buildings in Columbia were sold for new construction in Copperopolis.

Columbia, in its heyday, was California's second-largest city Unlike many gold rush boomtowns, Columbia never became a ghost town. In 1945, California created Columbia State Historic Park from the remains of the historical buildings of the city.

Columbia's main street in the historic district, part of the Columbia State Historic Park, is closed to automobile traffic, but horses, carriages, bicycles and pedestrians are welcomed. Known for the huge rock gardens left over from the hydro mining efforts in the 1800s, the area is very popular with families for picnicking and leisurely walks. The antique buildings are leased to era-themed businesses such as gold-panning, candle-dipping, iron-mongering, and crafts. There are several eating establishments, including the Fallon House Ice Cream Parlor and the Candy Store. A chicken coop with beautiful Barred-Rock hens lends a sweet background sound to Main Street. A horse-drawn wagon ride for a fee is the main attraction. There are numerous events throughout the year; some of the notable occasions are the Fourth of July parade and Pioneer Days. Occasionally local crafters set up booths along Main Street. Costumed State Park employees and shopkeepers lend to the era-theme of the park. Picnic tables are situated throughout the downtown. There is a fairly long hiking trail from the School House, which is located a couple of blocks from the town. The school is open with static exhibits. Two campgrounds nearby accommodate tenting and motorhomes, as well as a small general store for supplies. Two well-stocked thrift stores are within walking distance; one, Nancy's Hope Thrift Store, is located behind the 49er Church and supports local families.

Other points of interest in the area include Columbia Community College, a two-year, community college; and the Columbia Airport (FAA designator: O22), which has one 4,670-foot (1,420 m) runway and is busy with firefighting aircraft during summer. 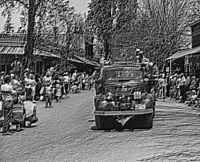 A parade is part of the annual Columbia Fire Muster, in May.

All content from Kiddle encyclopedia articles (including the article images and facts) can be freely used under Attribution-ShareAlike license, unless stated otherwise. Cite this article:
Columbia, California Facts for Kids. Kiddle Encyclopedia.