Kids Encyclopedia Facts
Not to be confused with China Camp State Park. 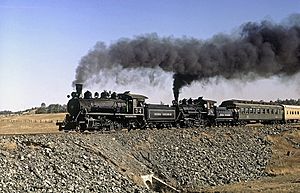 Chinese Camp is a census-designated place (CDP) in Tuolumne County, California, United States. The population was 126 at the 2010 census, down from 146 at the 2000 census. It lies in the grassy foothills of the Sierra Nevada near the southern end of California's Gold Country. 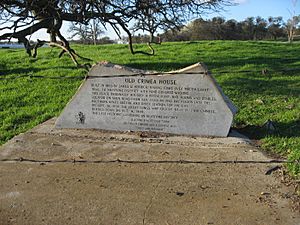 The site of the Old Crimea House. It was here where the First Tong War was fought.

Chinese Camp is the remnant of a notable California Gold Rush mining town. The settlement was first known as "Camp Washington" or "Washingtonville" and one of the few remaining streets is Washington Street. Some of the very first Chinese laborers arriving in California in 1849 were driven from neighboring Camp Salvado and resettled here, and the area started to become known as "Chinee" or "Chinese Camp" or "Chinese Diggings". At one point the town was home to an estimated 5,000 Chinese. 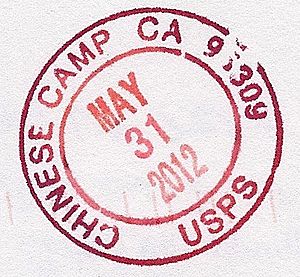 The Chinese Camp post office was established in the general store on April 18, 1854. This building is currently vacant, and a post office is in operation on a plot of land rented from a local resident.

An 1892 Tuolumne County history indicates that, in 1856, four of the six Chinese companies (protective associations) had agents here and that the first tong war (between the Sam Yap and Yan Woo tongs) was fought near here when the population of the area totaled several thousand. The actual location is several miles away, past the 'red hills', near the junction of Red Hills Road and J-59.

An 1860 diary says Chinese Camp was the metropolis for the mining district, with many urban comforts. While placer mining had played out in much of the Gold Country by the early 1860s, it was still active here as late as 1870. An 1899 mining bulletin listed the total gold production of the area as near US$2.5 million. 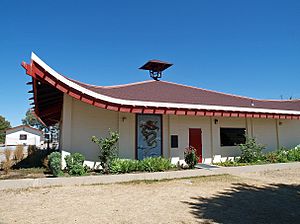 Chinese Camp is the location and subject of California Historical Landmark 423 – The Saint Francis Xavier Roman Catholic Church, established in 1849, making it the oldest church in the county. The church was renovated in 1949 by John Nicolini but has since fallen into disrepair. The church itself is owned by the Stockton archdiocese.

The current Chinese Camp School is very distinctive, having been designed by Dolores Nicolini in the style of a Chinese pagoda. This school has been in operation since 1970. Previously, the school was in a building near the church. This building was lost in a fire on May 4, 2006. The fire was caused by carelessness on the part of several local individuals. 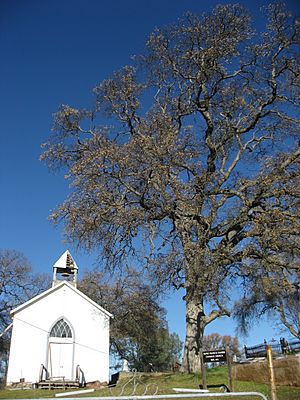 The old Catholic Church. There is a chain across the front to hold it up.

There were 57 households out of which 32% had children under the age of 18 living with them, 54% were married couples living together, 12% had a female householder with no husband present, and 32% were non-families. 30% of all households were made up of individuals and 9% had someone living alone who was 65 years of age or older. The average household size was 2.6 and the average family size was 3.2.

All content from Kiddle encyclopedia articles (including the article images and facts) can be freely used under Attribution-ShareAlike license, unless stated otherwise. Cite this article:
Chinese Camp, California Facts for Kids. Kiddle Encyclopedia.