Calaveras County, officially the County of Calaveras, is a county in the northern portion of the U.S. state, California. As of the 2010 census, the population was 45,578. The county seat is San Andreas, and Angels Camp is the only incorporated city. Calaveras is the Spanish word for skulls; the county was reportedly named for the remains of Native Americans discovered by the Spanish explorer Captain Gabriel Moraga.

Calaveras County is in both the Gold Country and High Sierra regions of California.

Calaveras Big Trees State Park, a preserve of Giant Sequoia trees, is in the county several miles east of the town of Arnold on State Highway 4. Credit for the discovery of giant sequoias here is given to Augustus T. Dowd, a trapper who made the discovery in 1852 while tracking a bear. When the bark from the "Discovery Tree" was removed and taken on a tour around the world, the trees became a worldwide sensation and one of the county's first tourist attractions. The uncommon gold telluride mineral calaverite was discovered in the county in 1861 and is named for it.

Mark Twain set his story, "The Celebrated Jumping Frog of Calaveras County", in the county. The county hosts an annual fair and Jumping Frog Jubilee, featuring a frog-jumping contest, to celebrate the association with Twain's story. Each year's winner is commemorated with a brass plaque mounted in the sidewalk of downtown Historic Angels Camp and this feature is known as the Frog Hop of Fame. The California red-legged frog, feared extinct in the county by 1969, was rediscovered in 2003.

The Spanish word calaveras means "skulls." The county takes its name from the Calaveras River; it was said to have been named by Spanish explorer Gabriel Moraga, during his 1806–1808 expeditions, when he found many skulls of Native Americans along the banks of the stream. He believed they had either died of famine or been killed in tribal conflicts over hunting and fishing grounds. A more likely cause was a European epidemic disease, acquired from interacting with other tribes near the Missions on the coast. The Stanislaus River, which runs through the county, is named for Estanislao, a Lakisamni Yokut who escaped from Mission San Jose in the late 1830s. He is reported to have raised a small group of men with crude weapons, hiding in the foothills when the Mexicans attacked. The natives were quickly decimated by Mexican gunfire.

In 1836, John Marsh, Jose Noriega, and a party of men, went exploring in Northern California. They made camp along a river bed in the evening, and when they woke up the next morning, discovered that they had camped in the midst of a great quantity of skulls and bones. They also gave the river the appropriate name: Calaveras.

The writer Mark Twain spent 88 seminal days in the county, during which time he heard the story that became The Celebrated Jumping Frog of Calaveras County in the Angel Hotel in 1865. This short story kicked off Mark Twain's career and put Calaveras County on the map.

Calaveras County was one of the original counties of the state of California, created in 1850 at the time of admission to the Union. Parts of the county's territory were reassigned to Amador County in 1854 and to Alpine County in 1864.

The county's geography includes beautiful landmarks, rolling hills, and giant valleys. It is also known for its friendly communities, and businesses such as agriculture management and construction engineering. It has numerous caverns, such as Mercer Caverns, California Cavern and Moaning Cavern that are national destinations for tourists from across the country. Other attractions include a thriving wine making industry, including the largest of the Calaveras wineries: Ironstone Vineyards, mountain sports recreation and the performing arts.

Gold prospecting in Calaveras County began in late 1848 with a camp founded by Henry and George Angel. The brothers first arrived in California as soldiers, serving under Colonel Frémont during the Mexican War. After the war's end, the brothers found themselves in Monterey where they heard of the fabulous finds in the gold fields. They joined the Carson-Robinson party of prospectors and set out for the mines. The company parted ways upon reaching what later became known as Angels Creek. The brothers tried placer mining but soon opened a trading post. By the end of the year, over one hundred tents were scattered about the creek and the settlement was referred to as Angels Trading Post, later shortened to Angels Camp.

Placer mining soon gave out around the camp, but an extensive gold-bearing quartz vein of the area's Mother Lode was located by the Winter brothers during the mid-1850s, and this brought in the foundations of a permanent town. This vein followed Main Street from Angels Creek up to the southern edge of Altaville. Five major mines worked the rich vein: the Stickle, the Utica, the Lightner, the Angels, and the Sultana. These mines reached their peaks during the 1880s and 1890s, when over 200 stamp mills crushed quartz ore brought in by hand cars on track from the mines. By the time hard rock mining was done, the five mines had producing a total of over $20 million in gold.

The telluride mineral calaverite was first recognized and obtained in 1861 from the Stanislaus Mine, Carson Hill, Angels Camp, in Calaveras Co., California. It was named for the County of origin by chemist and mineralogist Frederick Augustus Genth who differentiated it from the known gold telluride mineral sylvanite, and formally reported it as a new gold mineral in 1868. 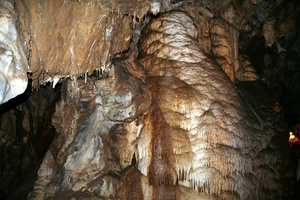 There were 16,469 households out of which 26.7% had children under the age of 18 living with them, 58.9% were married couples living together, 8.6% had a female householder with no husband present, and 28.7% were non-families. 23.3% of all households were made up of individuals and 10.1% had someone living alone who was 65 years of age or older. The average household size was 2.44 and the average family size was 2.85.

Angels Camp is the only incorporated city located in Calaveras County.

The population ranking of the following table is based on the 2010 census of Calaveras County.

All content from Kiddle encyclopedia articles (including the article images and facts) can be freely used under Attribution-ShareAlike license, unless stated otherwise. Cite this article:
Calaveras County, California Facts for Kids. Kiddle Encyclopedia.