Calaveras Big Trees State Park is a state park of California, United States, preserving two groves of giant sequoia trees. It is located 4 miles (6.4 km) northeast of Arnold, California in the middle elevations of the Sierra Nevada. It has been a major tourist attraction since 1852, when the existence of the trees was first widely reported, and is considered the longest continuously operated tourist facility in California. 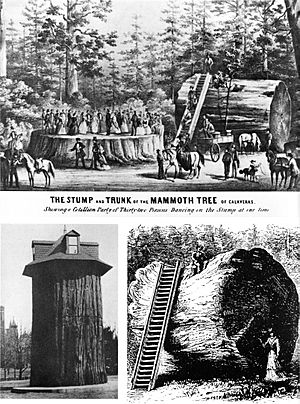 Shortly after their discovery by Europeans, giant sequoias were subject to many exhibitions

The giant sequoia was well known to Native American tribes living in its area. Native American names for the species include Wawona, toos-pung-ish and hea-mi-within, the latter two in the language of the Tule River Tribe.

The first reference to the giant sequoias of Calaveras Big Trees by Europeans is in 1833, in the diary of the explorer J. K. Leonard; the reference does not mention any specific locality, but his route would have taken him through the Calaveras Grove. This discovery was not publicized. The next European to see the trees was John M. Wooster, who carved his initials in the bark of the 'Hercules' tree in the Calaveras Grove in 1850; again, this received no publicity. Much more publicity was given to the "discovery" by Augustus T. Dowd of the North Grove in 1852, and this is commonly cited as the discovery of both the grove and the species as a whole.

The "Discovery Tree" was noted by Augustus T. Dowd in 1852 and felled in 1853, leaving a giant stump and a section of trunk showing the holes made by the augers used to fell it. It measured 25 ft (7.6 m) in diameter at its base and was determined by ring count to be 1,244 years old when felled. A section of the trunk was toured with little fanfare while the stump was later turned into a dance floor. John Muir wrote an essay titled "The Vandals Then Danced Upon the Stump!" to criticize the felling of the tree. 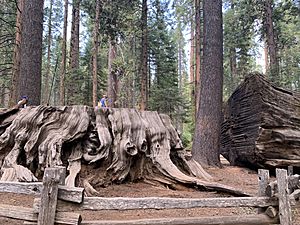 Discovery Tree - Largest known Giant Sequoia but it was cut down. Notice an adult person in above picture standing on its platform trunk

In 1854, a second tree named the "Mother of the Forest" was skinned alive, of its bark in 1854, to be reassembled at exhibitions. This mortally wounded the tree, since outer layer of protective bark was take away, tree lost its resistance to resistance to fire. If you look closely there are still horizontal saw marks in the wood to remove it bark. The tree didn't survive long after, having shed its entire canopy by 1861. In 1908, with the tree unprotected by its fire resistant bark, a fire swept through the area and burned away much of what was left of the tree. Today, only a fire-blackened snag remains of the Mother of the Forest. 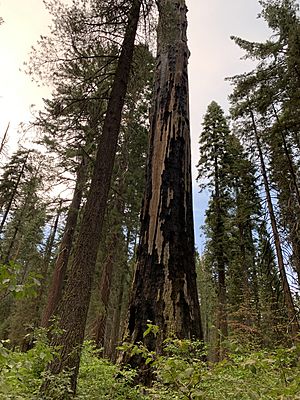 Mother of the Forest 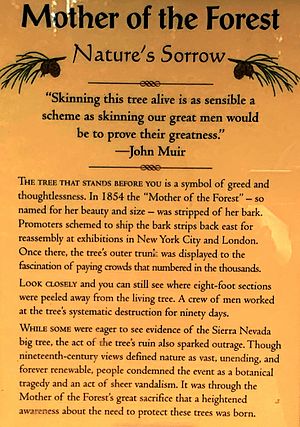 John Muir for Mother of the Forest

In early 1880s, a tunnel was cut through the compartments by a private land owner at the request of James Sperry, founder of the Murphys Hotel, so that tourists could pass through it. The tree was chosen in part because of the large forest fire scar. The Pioneer Cabin Tree, as it was soon called, emulated the tunnel carved into Yosemite's Wawona Tree, and was intended to compete with it for tourists.

Despite or due to the 1850s exhibitions, the destruction of the big trees was met with public outcry. In 1864, on introducing the bill that would become the Yosemite Grant, senator John Conness opined that even after people had seen the physical evidence of the Discovery Tree and the Mother of the Forest, they still didn’t believe the trees were genuine, and that the areas they were from should be protected instead. However, this did not guarantee any legal protection for the trees of Calaveras Grove.

By the turn of the century the land was owned by several lumber companies, with plans to cut the remaining trees down, as sequoia and giant sequoia with their thick trunks were seen as great sources of lumber at the time. This again caused a chorus of public outcry by locals and conservationists, and the area continued to be treated as a tourist attraction. The Yosemite protection was gradually extended to most sequoias, and Calaveras Grove was joined to California State Parks in 1931.

Parcels of land that would later become the state park and nearby national park were optioned by lumberman Robert P. Whiteside in January 1900, with the intention of logging. A protracted battle to preserve the trees was launched by Laura Lyon White and the California Club. Despite legislation in 1900 and 1909 authorizing the federal government to purchase the property, Whiteside refused to sell the land at the offered price, preferring its higher valuation as parkland. It was not until 1931 that Whiteside's family began to divest the property, beginning with the North Grove. 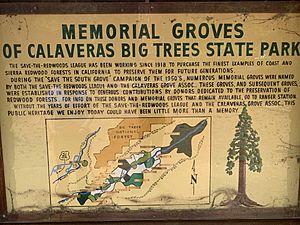 Over the years other parcels of mixed conifer forests, including the much larger South Calaveras Grove of Giant Sequoias (purchased in 1954 for US $2.8 million, equivalent to US $22.2 million in 2018 dollars), have been added to the park to bring the total area to over 6,400 acres (2,600 ha). The North Grove contains about 100 mature giant sequoias; the South Grove, about 1,000. According to Naturalist John Muir the forest protected by the park is: "A flowering glade in the very heart of the woods, forming a fine center for the student, and a delicious resting place for the weary." 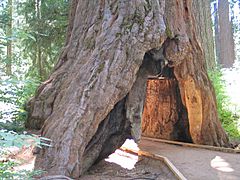 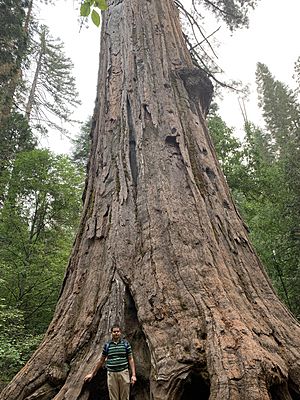 Louis Agassiz Tree - One of the last few Giant Sequoia 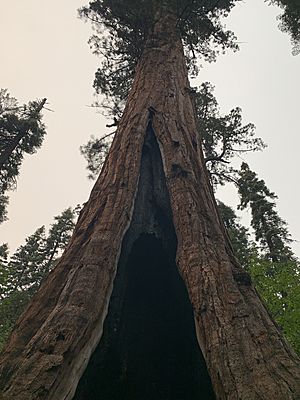 Palace Tree with large hollowed out trunk. Travellers have stuck nails on its internal trunk

Other attractions of Calaveras Big Trees include the Stanislaus River, Beaver Creek, the Lava Bluff Trail, and Bradley Trail. 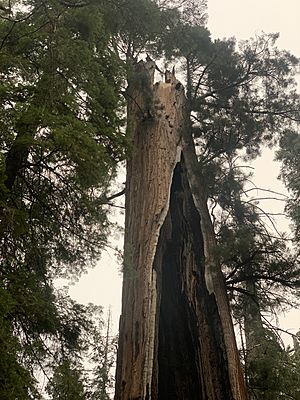 Giant Sequoia burned in fire of 1908 holding its ground

The park houses two main campgrounds with a total of 129 campsites, six picnic areas and hundreds of miles of established trails.

Other activities include cross-country skiing, evening ranger talks, numerous interpretive programs, environmental educational programs, junior ranger programs, hiking, mountain biking, bird watching and summer school activities for school children. Dogs are welcome in the park on leash in developed areas like picnic sites, campgrounds, roads and fire roads (dirt). Dogs are not allowed on the designated trails, nor in the woods in general.

All content from Kiddle encyclopedia articles (including the article images and facts) can be freely used under Attribution-ShareAlike license, unless stated otherwise. Cite this article:
Calaveras Big Trees State Park Facts for Kids. Kiddle Encyclopedia.