Murphys, originally Murphys New Diggings then Murphy's Camp, is an unincorporated village located in the foothills of the Sierra Nevada mountains in Calaveras County, California, United States. The population was 2,213 at the 2010 census, up from 2,061 at the 2000 census.

John and Daniel Murphy were part of the Stephens-Townsend-Murphy Party, the first immigrant party to bring wagons across the Sierra Nevada to Sutter's Fort in 1844. They earned a living as merchants, but like many others, began prospecting when the California Gold Rush began. They first started in Vallecito, which was known as "Murphys Old Diggings," before moving to another location in 1848 which became "Murphys New Diggings," "Murphy's Camp," and eventually just "Murphys."

The placer mining in this location was wildly successful. Miners were limited to claims of 8 square feet (0.75 m2) and yet many were still able to become rich. The Murphy brothers themselves, however, made far more money as merchants than as miners. In fact, John was so successful that he left town at the end of 1849 and never returned, having amassed a personal fortune of nearly $2 million. Roughly $20 million in gold was discovered in Murphys and the surrounding area. Two of the richest diggings were named Owlsburg and Owlburrow Flat. 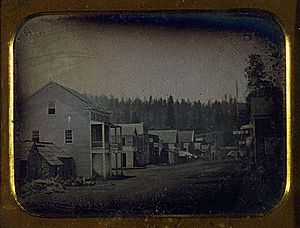 Murphys was also a popular destination as a tourist resort, as the nearby giant sequoia trees in what is now Calaveras Big Trees State Park were a major draw, and they continue to be so today. After visiting, John Muir wrote in his book, The Mountains of California (1894):

"MURPHY'S CAMP is a curious old mining-town in Calaveras County, at an elevation of 2,400 feet (730 m) above the sea, situated like a nest in the center of a rough, gravelly region, rich in gold. Granites, slates, lavas, limestone, iron ores, quartz veins, auriferous gravels, remnants of dead fire-rivers and dead water-rivers are developed here side by side within a radius of a few miles, and placed invitingly open before the student like a book, while the people and the region beyond the camp furnish mines of study of never-failing interest and variety."

Like many other mining towns, fire was its bane and the town was destroyed three times by flames, in 1859, 1874, and 1893. After the second major fire, there was little gold left to mine, and so the town was never rebuilt to its boomtown condition. However, Murphys continued to thrive as a merchant center, supplying many of the silver mines in Nevada with provisions via Ebbetts Pass. The town is registered as California Historical Landmark #275. A "Hall of Comparative Ovations" built by a chapter of the clampers still stands in Murphys. The picture below labeled "Murphys' Famous Residents Wall" is a picture of the "Wall of Comparative Ovations" at the "Old Timer Museum" in Murphys, CA. The plaques on the wall are installed and maintained by members of "E Clampus Vitus."

The first post office was established as Murphy's in 1851. The name was changed to Murphy in 1894, and finally to Murphys in 1935.

This region experiences warm to very hot, dry summers, with average monthly temperatures above 71.6 °F (22.0 °C), and many days above 100 °F (38 °C) during summer months. According to the Köppen Climate Classification system, Murphys has a warm-summer Mediterranean climate, abbreviated "Csb" on climate maps. 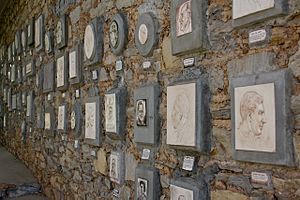 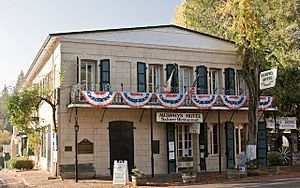 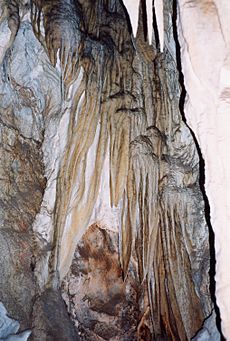 All content from Kiddle encyclopedia articles (including the article images and facts) can be freely used under Attribution-ShareAlike license, unless stated otherwise. Cite this article:
Murphys, California Facts for Kids. Kiddle Encyclopedia.