Jackson (formerly, Botilleas, Botilleas Spring, Bottileas, Bottle Spring, and Botellas) is the county seat of Amador County, California. The population was 4,651 at the 2010 census, up from 3,989 at the 2000 census. The city is accessible by both State Route 49 and State Route 88.

According to the United States Census Bureau, the city has a total area of 3.7 square miles (9.6 km2), all of it land. Jackson Creek traverses the city. Alluvial soils such as Pardee Cobbly Loam is found throughout the Jackson area. 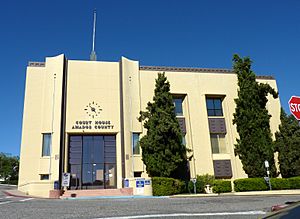 The Amador County Courthouse consists of two buildings, the second courthouse (built 1864) and the Hall of Records (1893), that were enclosed and combined in 1939 with an Art Deco exterior. It was recently closed and legal activities have resumed in another, newer facility.

The area was inhabited by the Northern Sierra Indians, who occupied areas along creeks, spring and seep areas, including permanent and seasonal drainages, flat ridges and terraces. Therefore, areas along watercourses are considered likely locations for prehistoric cultural resources. Permanent villages were usually placed on elevations above seasonal flood levels. Surrounding areas were used for hunting and seed, acorn, and grass gathering.

Jackson, named after Colonel Alden Jackson, was founded in 1848 around a year-round spring. Settlement of the region by American pioneers was stimulated by the discovery of gold in the Sierra foothills around 1848. The settlement was named for a local lawyer who was liked by miners named Alden Appola Moore Jackson. Although Amador County was an important mining center, its County seat of Jackson was not typical of the early gold camps. The camp grew quickly, as besides being a popular mining spot, it was also a convenient stopping place on the road from Sacramento to the Southern Mines. The camp became an important supply and transportation center for the neighboring towns, and by 1850 the population had reached an estimated 1,500. Jackson grew first as a watering hole for cattle, then as one of the earliest and most durable of the Mother Lode's hard rock mining areas. 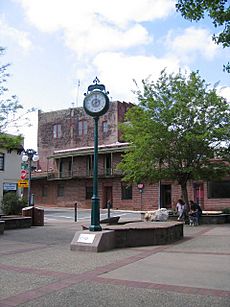 Placer mining gave out by the 1860s, replaced by hard rock mining. One of the town's most prominent historical landmarks, the Kennedy Mine, began operation in 1860; at the time of its closure during World War II in 1942, it was the deepest gold mine in North America, at 1802 meters; (5912 ft). On August 27, 1922 47 miners became trapped when a fire broke out in the Argonaut mine. All 47 men died in the fire but it wasn't until over a year later that the last body was recovered. The Argonaut mine incident was the worst gold mine disaster in US history.

In Oct, 1942 the US government passed the War Production Board Limitation Order which signaled the demise of gold mining in California. The government needed men for the war and gold was not considered a strategic war metal.

Jackson has several buildings listed on the National Register of Historic Places; several are noted below. 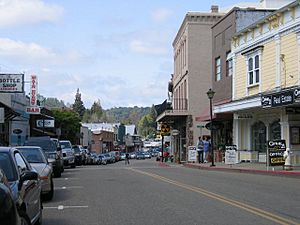 The City of Jackson in California is the center of trade and industry in Amador County. The majority of the shopping centers, government offices, and many businesses are located in Jackson and its neighbor town, Martell.

There were 1,746 households out of which 24.0% had children under the age of 18 living with them, 43.8% were married couples living together, 12.0% had a female householder with no husband present, and 41.4% were non-families. 36.1% of all households were made up of individuals and 20.0% had someone living alone who was 65 years of age or older. The average household size was 2.13 and the average family size was 2.74. 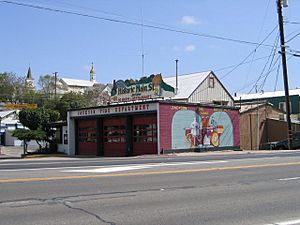 All content from Kiddle encyclopedia articles (including the article images and facts) can be freely used under Attribution-ShareAlike license, unless stated otherwise. Cite this article:
Jackson, California Facts for Kids. Kiddle Encyclopedia.