Mormon Bar is an unincorporated community in Mariposa County, California. It is located 2 miles (3.2 km) south-southeast of Mariposa, at an elevation of 1772 feet (540 m). Mormon Bar is located near State Route 49. 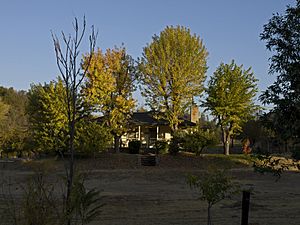 A standalone house at Mormon Bar

It was settled during the California Gold Rush. Mormons occupied the place during the winter of 1849/50. It was first mined by veterans of the Mormon Battalion in 1849 after their discharge in 1847. They did not stay very long, and other miners came and occupied the site.

At one time there was a significant Chinese presence there.

It is somewhat of a ghost town, and is listed on many maps and ghost town travel guides as such.

All content from Kiddle encyclopedia articles (including the article images and facts) can be freely used under Attribution-ShareAlike license, unless stated otherwise. Cite this article:
Mormon Bar, California Facts for Kids. Kiddle Encyclopedia.