Central California is a subregion of Northern California, generally thought of as the middle third of the state, north of Southern California. It includes the northern portion of the San Joaquin Valley (which itself is the southern portion of the Central Valley, beginning at the Sacramento–San Joaquin River Delta), the Central Coast, the central hills of the California Coast Ranges, and the foothills and mountain areas of the central Sierra Nevada.

Central California is considered to be west of the crest of the Sierra Nevada. (East of the Sierras is Eastern California.) The largest cities (over 50,000 population) in the region are Fresno, Modesto, Salinas, Visalia, Clovis, Merced, Turlock, Madera, Tulare, Porterville, and Hanford. 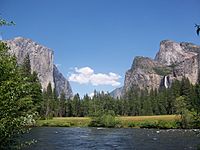 Central California can have widely varying definitions depending on the context. Some divide the state by lines of latitude making northern, central and southern sections. Others divide by county lines or watershed boundaries. Some definitions include more of the San Joaquin Valley and even larger portions of the Central Valley. Some have less or none of Central Coast.

Generally the widest definition of central California is the middle third of the state by latitude. 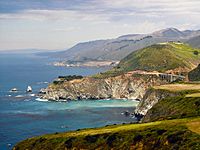 Central California as defined above includes the following 10 counties:

Area cities and towns listed below are major regional centers or county seats. 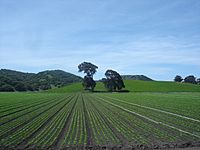 The following regions are entirely contained within central California:

The following regions are partly contained within central California:

All content from Kiddle encyclopedia articles (including the article images and facts) can be freely used under Attribution-ShareAlike license, unless stated otherwise. Cite this article:
Central California Facts for Kids. Kiddle Encyclopedia.