Pismo Beach (Chumash: Pismuʔ) is a city in the southern portion of San Luis Obispo County, in the Central Coast area of California, United States. The estimated population was 8,072 at the 2020 census, up from 7,655 in the 2010 census. It is part of the Five Cities Area, a cluster of cities in that area of San Luis Obispo County. The "Five Cities" area historically is made up of Arroyo Grande, Grover City (now Grover Beach), Halcyon, Fair Oaks and Nipomo. Now most people refer to the Five Cities as Grover Beach, Pismo Beach, Shell Beach (which is actually a part of Pismo Beach), Arroyo Grande and Oceano (which is unincorporated county land serviced by the Oceano Community Services District). 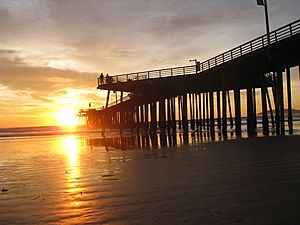 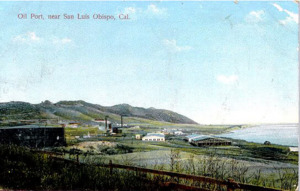 The first European land exploration of Alta California, the Spanish Portolà expedition, passed through the area, traveling up today's Price Canyon from Pismo Beach, where they camped on September 4, 1769. Franciscan missionary and expedition member Juan Crespi noted in his diary that they found a native village near the creek.

Pismo Beach is located on the Rancho Pismo Mexican land grant made to José Ortega, grandson of José Francisco Ortega, in 1840. In 1846 José Ortega sold Rancho Pismo to Isaac Sparks. John Michael Price bought most of the rancho from Isaac Sparks. Price established the town of Pismo Beach in 1891. His homestead is now Price Historical Park. His home is a registered historical landmark.

The name Pismo comes from the Chumash language word for tar, Pismu' , which was gathered from tar springs in Price Canyon near Pismo Beach. The tar was a valuable product which the Chumash Indians used to caulk their seagoing canoes, called tomol, which traveled along the coast and out to the Channel Islands.

The first wharf at Pismo was built in 1882, followed by a full-length pier built in 1924 that was financed and constructed by William Woodrow Ward who allowed full use of it by the public. After it suffered considerable storm damage, the pier was renovated again in 1985. Pismo State Beach is named for the city of Pismo Beach.

The neighborhoods of Shell Beach and Sunset Palisades were originally the site of a Chumash village, and significant archeological sites are located in both areas. Shell Beach became agricultural land, mostly pea fields. Developer Floyd Calvert bought and developed the area in 1926. At first it was a local resort area; after World War II it became primarily residential. Sunset Palisades, originally called Oilport, was the site of an oil refinery from 1907 until after World War II. It is now residential.

The Pismo clam was named for the long, wide beach where so many were once found, once in such abundance that they were harvested with plows. Clamming once drew thousands of clammers to Pismo during low tides, and is still legal; however, due to over-harvesting by humans and the protected sea otter (which feasts on clams), few clams are to be found.

Pismo Beach adopted the name "Clam Capital of the World" in the 1950s, though this motto is no longer used. The city still holds the Clam Festival every October, complete with clam chowder competitions and a clam-themed parade.

At the southern end of Price Street upon first entering Pismo Beach, a gigantic concrete clam statue greets visitors. The oldest Surf Shop on the Central Coast (Pismo Beach Surf Shop) is seen from the Pismo Clam. An eight-inch shell of the Pismo clam (Tivela stultorum) is on display at the Pismo Beach Chamber of Commerce.

Pismo Creek enters the Pacific Ocean at Pismo Beach. The southern end of Pismo Beach runs alongside sand dunes, which are followed by eucalyptus trees which attract thousands of migrating monarch butterflies every November through February.

Meadow Creek is a short creek that runs through the Pismo Lake Ecological Reserve and hosts a variety of wildlife despite its urban surroundings, including beaver (Castor canadensis). 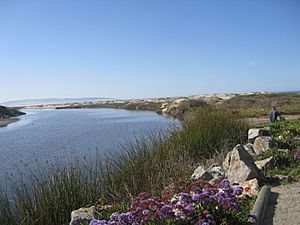 The population had a wave of expansion starting in the 1980s, after completion of waste water treatment facilities expansion designed by Kennedy Jenks Engineers; this lack of infrastructure had previously limited population growth.

The city has received a substantial number of mentions in popular culture, including the films The Big Lebowski, Clueless, and A Night at the Roxbury, the TV show United States of Tara, and the animated series Futurama, Robot Chicken, and The Critic.

The W. C. Fields comedy The Bank Dick (1940), set in Lompoc, includes a character listed in the film's credits as "A. Pismo Clam".

In Ali Baba Bunny, Bugs Bunny and his traveling companion Daffy Duck emerge from a burrow, believing they have arrived at Pismo Beach "and all the clams we can eat".

In the TV movie Dragnet 1966 (1969), Bill Gannon (Harry Morgan) takes disability retirement and moves to Pismo Beach. After eight months and three weeks of eating Pismo Beach clam chowder, Bill's health returns, his teeth stop falling out, and he is able to be reinstated with the L.A.P.D. Explaining to Joe Friday (Jack Webb) the reason for his restored health, he states, "The clams, Joe. The clams."

In The Monkees TV series episode 'The Wild Monkees' (aired 11-13-67), Pismo Beach in mentioned a few times. Mike Nesmith states 'You remember the Massacre at Pismo Beach?' when told the motocycle gang the black angels will be staying at the hotel they are working at. To which the rest of the group replies 'Pismo Beach?'

In the movie Clueless (1995), the fictitious "Pismo Beach disaster" is referred to.

In the I Love Lucy TV series episode 'Lucy Gets In Pictures' (aired 02-21-55), Lucy (Lucille Ball) mentions Pismo Beach as one of the locations that she and her best friend, Ethel Mertz (Vivian Vance), want to visit. 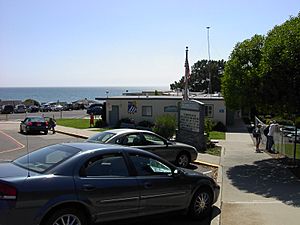 All content from Kiddle encyclopedia articles (including the article images and facts) can be freely used under Attribution-ShareAlike license, unless stated otherwise. Cite this article:
Pismo Beach, California Facts for Kids. Kiddle Encyclopedia.