San Benito County is a county located in the Coast Range Mountains of the U.S. state of California. As of the 2010 census, the population was 55,269. The county seat is Hollister.

El Camino Real passes through the county and includes one mission in San Juan Bautista.

San Benito County was formed from parts of Monterey County in 1874.

The county is named after the San Benito Valley. Father Juan Crespí, in his expedition in 1772, named a small river in honor of San Benedicto (Saint Benedict), the patron saint of the married, and it is from the contraction of this name that the county took its name.

Sharing a border with Santa Clara County, San Benito County lies adjacent to the San Francisco Bay Area and is sometimes considered a part of that region. Frequently, the county is associated with the Monterey Bay Area through governmental organizations such as the Association of Monterey Bay Area Governments as well as the Pajaro River, which flows from northern San Benito County into the Monterey Bay. However, the United States Census Bureau includes the county in the San Jose-Sunnyvale-Santa Clara MSA and the San Jose-San Francisco-Oakland CSA, which the Census uses as a statistical definition of the San Francisco Bay Area.

The county also borders Merced County and Fresno County in the east, which lead onto California's San Joaquin Valley.

The county is also the location of the Mount Harlan and San Benito American Viticultural Areas. The latter contains the Cienega Valley, Lime Kiln Valley, and Paicines AVAs.

There were 15,885 households out of which 46.3% had children under the age of 18 living with them, 65.7% were married couples living together, 10.5% had a female householder with no husband present, and 18.8% were non-families. 14.1% of all households were made up of individuals and 5.4% had someone living alone who was 65 years of age or older. The average household size was 3.32 and the average family size was 3.64.

San Benito County Express provides fixed route service in the city of Hollister, and intercity service in the northern portion of the county. Service operates as far north as Gilroy, in Santa Clara County. 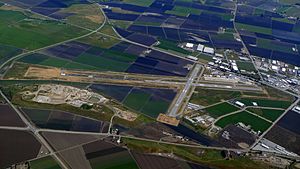 The population ranking of the following table is based on the 2010 census of San Benito County.

All content from Kiddle encyclopedia articles (including the article images and facts) can be freely used under Attribution-ShareAlike license, unless stated otherwise. Cite this article:
San Benito County, California Facts for Kids. Kiddle Encyclopedia.