The unincorporated community of Paicines, formerly Tres Pinos, is located at 680 feet (207 m) above mean sea level (AMSL) in San Benito County, California along State Route 25. Guide signs along SR 25 say the community is 13 miles (21 km) south of Hollister. The community is at the intersection of Panoche Road and SR 25. Bolado County Park is just over three miles (5 km) north of the community and the site of the San Benito County Fair.

Hydrologic features in the area include Tres Pinos Creek, the San Benito River, and the Paicines Reservoir. The area is in the San Andreas Rift Zone area in proximity to the San Andreas Fault. Areas to the south and east are mountainous. The county line runs along the Gabilan Range.

The community is a gateway to Pinnacles National Park, a National Park straddling the mountains along the Monterey-San Benito County line. 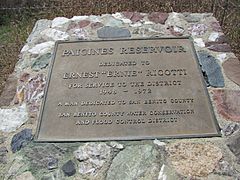 Famous people associated with Paicines include Lieutenant General Janet C. Wolfenbarger, the highest-ranking woman in the United States Air Force; her parents Eldon and Shirley Libby reside in Paicines. Charlie Root, the famous Chicago Cubs pitcher and coach, retired there to a ranch. Actress Judy Garland (born Frances Ethel Gumm; June 10, 1922 – June 22, 1969) married her third husband, Sid Luft, at what was then known as The Law Ranch, now called The Paicines Ranch. Tiburcio Vásquez, a bandido who was active in the area.

The ZIP Code is 95043. The community is inside area code 831. The local prefix is 389. Local telephone service is provided by Pinnacles Telephone Co., an independent telephone company.

The town of Paicines was originally located 5 miles north of the town of Tres Pinos. The opposite is true today.

All content from Kiddle encyclopedia articles (including the article images and facts) can be freely used under Attribution-ShareAlike license, unless stated otherwise. Cite this article:
Paicines, California Facts for Kids. Kiddle Encyclopedia.