This region experiences warm (but not hot) and dry summers, with no average monthly temperatures above 71.6 °F. According to the Köppen Climate Classification system, San Juan Bautista has a warm-summer Mediterranean climate, abbreviated "Csb" on climate maps.

Prior to the arrival of Europeans, the area around San Juan Bautista was populated by the Mutsunes, a branch of the Ohlone Indians. The Mutsunes lived in villages composed of thatched huts made of willow and grass, and as they lived the simple hunter-gatherer lifestyle common to California Indians, left little mark on the land. Today, the Mutsunes are extinct, with the last full-blooded native, Ascención Solórzano, dying in 1930.

In 1797, the Spanish Franciscan priest fray Fermín de Lasuén founded Mission San Juan Bautista to facilitate the conversion of the native people to Catholicism; in the process, he claimed the land for the Spanish Empire. Lasuén chose the site because of the area's fertile cropland, steady water supply, and sizable Indian population. At its height, the Mission had over 1200 neophytes living within its walls. The mission churchyard holds the remains of about 4500 Indians. Construction of the current mission church began in 1803, and has served the community continuously since 1812. The mission was located on the Camino Real, a "royal highway" which connected the California missions and which remained well-used until the 19th century.

In 1821, Mexico revolted against Spain, winning independence for itself, and making California a province of the newly independent Mexico. By 1834, a town known as San Juan de Castro has sprouted up around the mission. It drew its name from the town's prominent alcalde José Tiburcio Castro. In 1834 the mission was secularized, and Castro appointed executor of the property. Accordingly, he divided and auctioned off the former mission properties. His son, José Antonio Castro, built the Castro Adobe on the south side of the Plaza Mayor in 1840; however, Castro's frequent involvement in government kept him from spending much time there. Castro was a key member of the overthrow of governors Nicolás Gutiérrez in 1836 and Manuel Micheltorena in 1844.

After defeating Micheltorena and his ill-equipped "Cholo" army, José Antonio Castro was appointed Comandante General of California, in charge of the Mexican Army's operations in California. From San Juan Bautista, Castro ordered the army against potential foreign incursions. He kept especially close watch over the movements of John C. Frémont, an American military officer who had been let into California to conduct a survey of the interior. Though given explicit instructions to stay away from coastal settlements, Frémont soon broke the agreement by taking his team to Monterey, a potential military target. When Castro told Frémont he would have to leave the country, the situation came close to war when he obstinately refused to leave and instead set up a base on Gavilán Peak, overlooking the town of San Juan. However, fighting was avoided and Frémont, grudgingly, withdrew.

The mission had 1,248 Mutsun Native Americans. The Census reported that 1,857 people (99.7% of the population) lived in households, 5 (0.3%) lived in non-institutionalized group quarters, and 0 (0%) were institutionalized.

There were 567 households out of which 36.0% had children under the age of 18 living with them, 50.1% were married couples living together, 13.4% had a female householder with no husband present, and 31.4% were non-families. 23.6% of all households were made up of individuals and 9.0% had someone living alone who was 65 years of age or older. The average household size was 2.73 and the average family size was 3.24. 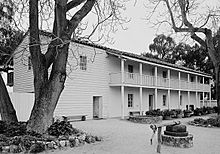 All content from Kiddle encyclopedia articles (including the article images and facts) can be freely used under Attribution-ShareAlike license, unless stated otherwise. Cite this article:
San Juan Bautista, California Facts for Kids. Kiddle Encyclopedia.