The first European land exploration of Alta California, the Spanish Portolà expedition, camped near the river for two nights, in the vicinity of today's community of Pajaro, on October 8–9, 1769. The party continued north the next day toward Santa Cruz. Expedition soldiers called it "Pajaro" (meaning "bird" in Spanish) because the natives they saw there had a large stuffed bird. Franciscan missionary Juan Crespi, traveling with the expedition, noted in his diary that, "to some of our party it looked like a royal eagle" (possibly an osprey). 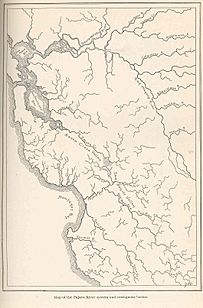 Monterey Bay is south of the San Francisco Bay

In 1953 the State Water Resource Control Board determined that the Pajaro Valley Watershed suffered from saltwater intrusion due to groundwater overdraft. In the 1970s, the groundwater basin consistently fell below sea level, and was identified in 1980 as critically over-drafted. By the 21st century, 54 square miles of the Pajaro Watershed's groundwater supply was overdrawn and as a result, below sea level making the area susceptible to saltwater intrusion.

The Pajaro River has a recurring history of flooding. The towns of Pajaro and Watsonville were built on the river's natural floodplain. Before the Army Corps of Engineers built the levees, flooding devastated homes, businesses, and agriculture. Since the $748,000 levees were constructed in 1949, there have been several instances of flooding from severe weather events and failed levees. In 1963, the USACE (United States Army Corps of Engineers) acknowledged poor planning in levee design, and congress authorized re-construction of the flood control system, however no funds were provided from the federal government.

Following the 1995 floods, several lawsuits were issued against the different counties and cities by farmers and homeowners affected. Santa Cruz County, Monterey County, and the California Department of Transportation were all held responsible for failing to maintain the Pajaro River during floods and sued by about 250 people. Plaintiffs held the counties responsible because in 1944, both counties made promises to maintain the levees implemented by the Army Corps of Engineers. 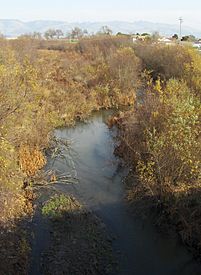 The San Andreas Fault line crosses the Pajaro River at the Pajaro Gap near Aromas, California and California State Route 129. The Salinian Block rests above the Pacific Plate which slips north along the San Andres Fault. It is made up of granitic material, and marine sediments.

The Pajaro River has a history of changing its course due to the San Andreas fault slippage between the Pacific plate and the North American Plate. At another time it flowed into the Elkhorn Slough in Moss Landing, California then into the Pacific Ocean, but today it joins with Corralitos Creek to discharge into the Pacific at a slightly more north location.

Other faults within the watershed are the Zayante fault, Sargent Fault, and Calaveras fault.

A.R. Wilson Granite Rock quarry is located by the Pajaro gap adjacent to the river in San Benito county.

Due to the geology in the area, the geomorphology of the watershed is unique. The river begins at Diablo range in the east. In the south, from the Gabilan mountains flows another tributary northward. From the north, tributaries flow from the Santa Cruz mountains southward to meet with the Pajaro.

The climate of the region is Mediterranean. Watsonville annual high temperatures reach 68 °F and lows of 47 °F. The average temperature is around 57 °F and average annual precipitation (essentially all in the form of rainfall) is about 23.5 inches.

Certain tributaries frequently run dry due to a lack of rainfall in the summer.

The watershed is approximately 1,300 square miles (3,400 km2) and covers portions of Santa Cruz, Santa Clara, San Benito, and Monterey Counties. The Pajaro River mainstem begins just west of San Felipe Lake, also called Upper Soap Lake, which is a permanent natural lake formed by the confluence of Pacheco Creek, Tequisquita Slough and Ortega Creek. Pacheco Creek's headwaters are in the Diablo Range at about 400 feet (120 m) elevation. The Pajaro River mainstream flows west for 30 miles (50 km), passing the city of Watsonville and emptying into Monterey Bay. Lower Soap Lake, also called Soap Lake, is an intermittent body of water a few miles downstream of the upper lake. This type of water body forms when the channel below is unable to keep up with the flow coming from upstream. The San Andreas Fault divides the watershed and is responsible for altering historical flow paths.

San Felipe Lake lies just south of the Santa Clara County line in San Benito County, just south of Highway 152 east of Gilroy at the foot of the Diablo Range. The lake is a sag pond dammed by the fault scarp of the Calaveras Fault, which forms a natural dike along the western shoreline. It is perennial in all but the driest years, e.g. 1977. San Felipe Lake used to be 50% larger until the man-made North and South Outflow canals, which drain to the Miller Canal, were cut through the western rim in 1874.

The lower watershed is in Santa Cruz and Monterey Counties which currently have levee systems. The original river system was Corralitos Creek, fed by Aromas Creek. The Pajaro river has taken over this system, and Corralitos Creek is now only a tributary.

A residential development, agricultural fields, and Zmudowski State Beach border the Pajaro River mouth and the connecting Watsonville Slough. The river mouth is often open to tidal action for extended periods, especially during the winter months. Should the mouth fill with sediment, it must be physically reopened to prevent nearby agricultural fields from flooding.

The main water source for agriculture and drinking water in the region comes from groundwater. The three primary aquifers in the Pajaro Watershed are the Alluvial, the Aromas, and the Purisma aquifers. All three suffer from seawater intrusion due to groundwater overdraft, the worst affected being the Aromas aquifer. The Alluvial aquifer is heavily polluted by agricultural runoff.

In 2006, the Pajaro River was designated as America's most endangered river by the American Rivers organization, "due to levees" constructed by the Army Corps of Engineers along its lower 22 miles (35 km) and severe runoff into the river from agricultural fields.

Four species are listed as threatened or endangered under the federal Endangered Species Act of 1973 (ESA) that are present or for which suitable habitat exists in or adjacent to the Pajaro River. Steelhead trout, the California red-legged frog (Rana draytonii), the Northern tidewater goby (Eucyclogobius newberryi,), and the snowy plover (Charadrius nivosus), which nests at the Pajaro river mouth at Zumdowski State Beach at the Pacific Ocean.

San Felipe Lake, which is the central feature of the “Bolsa de San Felipe”, is designated as a “California Important Bird Area” by the National Audubon Society. The Bolsa is a crossroads for birds migrating between San Francisco Bay to the north, Monterey Bay to the west and the Central Valley to the east. The Bolsa is also identified by the National Audubon Society as a “bird vagrant trap”, a site where bird species far outside of their normal range appear.

The Pajaro River serves as a migration pathway for adult steelhead trout (Oncorhynchus mykiss) migrating to spawning and nursery habitat in the upper watersheds of the Pajaro's tributaries (Corralitos, Uvas, Llagas and Pacheco Creeks), although the Pajaro River mainstem itself provides poor spawning and rearing habitat due to low summer flows and high sedimentation loads.

Historically, the Pajaro River is one of two Northern California coastal rivers mentioned in 1829 by Russian explorer K. T. Khlebnikov as hosting sturgeon, presumably white sturgeon (Acipenser transmontanus), along with the Russian River. In a 1912 report, Stanford University ichthyologist John Otterbein Snyder reported that Chinook salmon (Oncorhynchus tschawytscha) were present in the Pajaro River historically, although no specimens were taken. Snyder did not report Coho salmon (Oncorhyncus kisutch) south of the San Lorenzo River, 25 miles (40 km) north of the Pajaro River mouth on the California coast.

The river is heavily polluted by people dumping illegally. One cleanup in 2015 revealed over 1,000 tires, five boats, two trucks, and tons of trash.

In 2010 the City of Watsonville was awarded a $424,000 grant to create a public access point for canoes and kayaks, including a parking lot, trail, and public restrooms.

The Pajaro River CARE project was funded by the California Natural Resources Agency.

The Pajaro River Bench Excavation Project which was approved in 2012 will remove excess sediment and vegetation from the bench in order to better allow flow through the levees to improve flood protection. Approximately 336,000 cubic yards will be removed. The project begins at Murphy's crossing, and extends 7.5 miles westward to the Pacific Ocean ending before highway 1.

The state of California allocated $7.6 million to the Pajaro watershed to pay for water projects. One project funded was the building of two 1 million gallon storage tanks for the waste water recycling plant which provides water to local agriculture in the Valley.

In early 2015, a land purchase in the upper Pajaro Watershed was purchased by Santa Clara Valley Open Space Authority in an effort to preserve agriculture, and increase floodplain and wildlife protection in Santa Clara County. This land is where Llagas Creek and the Pajaro River intersect, with about 183 total acres. The intention is to leave the land undeveloped, thereby reducing risk of flooding for the lower watershed. It is also intended to preserve and restore habitat corridors linking the Santa Cruz, Gabilan, and Mt. Hamilton Ranges.

All content from Kiddle encyclopedia articles (including the article images and facts) can be freely used under Attribution-ShareAlike license, unless stated otherwise. Cite this article:
Pajaro River Facts for Kids. Kiddle Encyclopedia.