Watsonville is a city in Santa Cruz County, California, United States. The population was 51,199 according to the 2010 census. Located on the central coast of California, the economy centers predominantly around the farming industry. It is known for growing strawberries, apples, lettuce and a host of other vegetables. Watsonville is home to people of varied ethnic backgrounds. There is a large Hispanic population, a group of Croats, Portuguese, Filipino, Caucasian, Sikhs and Japanese population that live and work in the city.

The Pajaro Valley, wherein Watsonville is located, has a climate that is usually pleasant — around 60 to 70 degrees Fahrenheit throughout the year. This climate makes Watsonville an attractive coastal environment for the neighboring inland communities with very hot summers. The Pajaro Valley Unified School District has an attendance of about 18,000 students kindergarten through 12th grades. There are several private religious-based schools in Watsonville such as Notre Dame School, Monte Vista Christian, Salesian Sisters and St. Francis. There are also several charter schools and the non-religious independent Pre-K through 12th grade Mount Madonna School. These schools provide a wide range of educational options for local families. Watsonville is generally conservative on the political spectrum and average in relationship to the neighboring communities of Salinas, Castroville, and Prunedale.

The larger coastal town directly north of Watsonville is the city of Santa Cruz. Santa Cruz is a draw for many young college students who attend Cabrillo College or University of California, Santa Cruz. Because Watsonville and Santa Cruz are beach towns, they draw many visitors from San Jose and from the Central Valley areas. Like neighboring Salinas in Monterey County, Watsonville produces a variety of fruits and vegetables, primarily apples, strawberries, blackberries, raspberries, and table mushrooms.

Watsonville's land was first inhabited by an Indian tribe called the Costanoans. This tribe settled along the Pajaro Dunes since the land was fertile and useful for the cultivation of their plants and animals. In 1796, European explorers came to the land where they claimed to have seen a big bird along the side of the river, this symbol helped explorers to establish the name of the main river, which they identified as Rio del Pajaro, or River of the Bird. This river that runs along the boundaries of the city divides the Santa Cruz County and the Monterey County. In 1847, the second wave of European explorers was presented to this land where they finally decided to settle. Forty of these explorers officially lived in the city and had animals and some crops. In 1848, the gold rush in the Sierra Mountains was an important event for the city because people began to buy land for the low price that it had, allowing them to acquire large acres of property where farming and ranching would be among the simple practices that would shape the economy of the city. The community was incorporated as the Town of Watsonville on or about March 30, 1868 and named after Judge John Watson. The town changed its name to the City of Watsonville about 1889. The voters adopted a charter in 1903.

The first European land exploration of Alta California, the Spanish Portolà expedition, passed through the area on its way north, camping at one of the lakes north of town for five nights, on October 10–14, 1769. Many of the expedition soldiers were suffering from scurvy, so progress was slow. While the sick recuperated, scouts led by Sergeant Ortega went ahead to find the best way forward. On the fifth day, Franciscan missionary Juan Crespi, traveling with the expedition, noted in his diary that, "This afternoon the explorers returned. The sergeant reported that he had gone ahead twelve leagues without getting any information of the harbor that we are looking for, and that he went to the foot of a high, white mountain range."

During the October 10 march, the explorers first saw the Coast redwood tree (Spanish: palo colorado). A bronze plaque at Pinto Lake commemorates the event. On October 15, the expedition continued to the northwest past today's community of Freedom, camping that night at Corralitos Lagoon.

Watsonville is located on the Rancho Bolsa del Pajaro Mexican land grant made to Sebastian Rodríguez in 1837. Judge John H. Watson and D. S. Gregory laid out the town in 1852. Watsonville was incorporated on March 30, 1868.

Watsonville is located in the Monterey Bay area about 95 miles south of San Francisco at the southern end of Santa Cruz County. 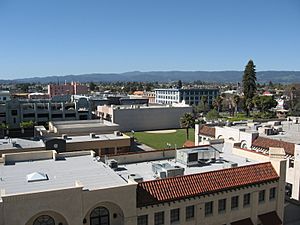 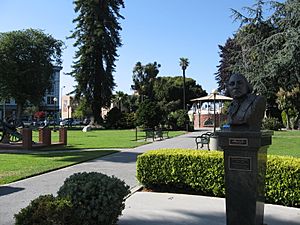 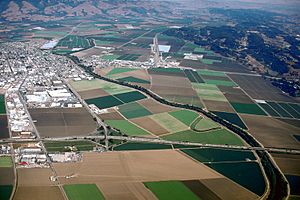 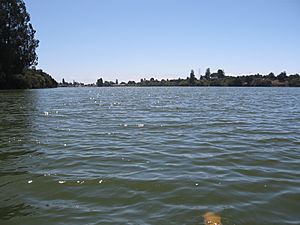 The National Weather Service cooperative station at the Watsonville Waterworks reports cool, relatively wet winters and mild, dry summers. Fog and low overcast is common in the night and morning hours, especially in the summer when warmer air from inland areas mixes with the cool, moist air near Monterey Bay. Its Köppen classification is cool-summer mediterranean climate.

Average annual rainfall is 22.42 inches, with measurable precipitation falling on an average of 61 days each year. The wettest year on record was 1983 with 48.35 inches and the driest year was 1976 with 10.66 inches. The most rainfall in one month was 15.99 inches in February 1998. The most rainfall in 24 hours was 5.93 inches on February 14, 2000. Although significant snowfall occurs several times a year on the higher mountains nearby, measurable snowfall is a rarity along Monterey Bay. On February 26, 2010 there was slight snowfall in Watsonville, though it was such a small amount that it could not be measured.

The City of Watsonville has habitat areas that support the endangered species Santa Cruz Tarweed on the California coastal prairie ecosystem. Considerable population growth occurred since 1980, requiring preparation of a number of Environmental Impact Reports, with resultant development removing certain lands of the city from productive natural habitat.

Most of the coastal land adjacent to Watsonville is part of the Monterey Bay National Marine Sanctuary, a designation championed by former Congressman Leon Panetta. Heading away from the coast, the backdrop features the southern end of the Santa Cruz Mountains.

Another protected natural resource is the Watsonville wetlands. Also referred to as the Watsonville sloughs, they are a system of fresh water sloughs with open water and native vegetation which extend from the city to the ocean. This slough system is only one of a few remaining wetland areas of its kind in the California Coastal Region. Not only are the wetlands home to approximately nine species of fish and over 200 species of waterfowl, raptors and song birds, but they are also a vital stopping off point on the Pacific Flyway for the thousands of migrating birds.

In 1990 both private and municipal organizations worked together to stop development and protect this important resource. The Watsonville Wetlands Watch was established at that time with the task of restoring and protecting the slough's natural habit. "Watching the Watsonville Wetlands," a book published by the organization and written by Jerry Busch, Gary Kittleson and Christine Johnson-Lyons tells the history and explains the importance of these wetland areas. 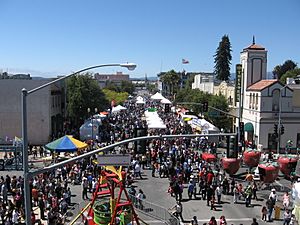 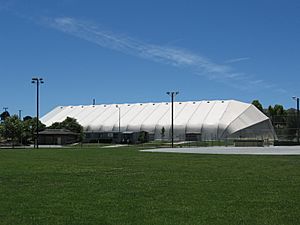 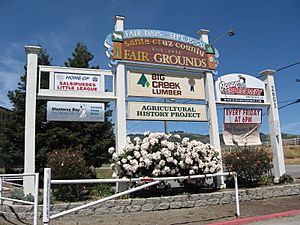 Watsonville is home to the annual Strawberry Festival, which includes a wide variety of strawberry based foods, live music, vendors, and rides.

Watsonville Municipal Airport (WVI) is home to the annual Watsonville Fly-in and Air Show, which showcases both military and civilian aircraft and includes a small car show.

Near the end of every summer, the Santa Cruz County fair has drawn visitors from across and outside the county to its many attractions including rides, food, art exhibits, flower exhibits, pony rides, petting zoos, dog shows, and live music performances, among other things.

Hiking trails are positioned throughout the city as well as a nature center provides the public with an intimate view of The Watsonville Wetlands.

A number of trail heads have been built throughout the city, which provide access to the Pajaro River and its tributaries via The Pajaro River Levee Trail Park. The levee trails are a popular spot for walking, running, and biking. In 2010 the City of Watsonville was awarded a $424,000 grant to create a public access point to the Pajaro River for canoes and kayaks, including a parking lot, trail and public restroom.

The City operates one of two parks at Pinto Lake, which includes a small watercraft launch ramp, group picnic areas, an RV park, a Baseball field, Volleyball, children's playground, boat rentals, fishing, and bird watching. There have been many cases in which the water at Pinto Lake becomes a thick green due to different types of algae forming in the water. Due to these occurrences, the City of Watsonville has prohibited the eating of fish caught in Pinto Lake. The second park at Pinto Lake is operated by The County of Santa Cruz and includes nature trails, disc golf, sports fields also home to the Monterey Bay Center of the California Conservation Corps.

The town was the location in which much of Killer Klowns From Outer Space, a cult classic, was filmed.

California writer Robert A. Heinlein set a part of his 1982 novel Friday at Pajaro Sands, near Watsonville. Scenes from the 1986 film Brotherhood of Justice were shot in Watsonville with Keanu Reeves and Kiefer Sutherland.

The 1996 play Watsonville by Cherríe Moraga is set in the city.

Watsonville also has a large Asian-American presence consisting of Chinese, Japanese and Filipinos despite the fact that the percentage of city residents of Asian descent has dropped since 1960. The Chinese, Japanese and Filipinos had residential sections and opened many businesses to serve their customer base in town during the mid 20th century. The history of East Asians in Watsonville dates back to the late 19th century and are involved in the local agricultural industry. It is presumed that as a result of Japanese-American internment during WWII, local farm companies began to attract Mexican migrant labor to the area in higher numbers and the town's racial-ethnic composition became more Hispanic in the 1980s and 1990s.

There were 11,381 households out of which 49.2% had children under the age of 18 living with them, 56.3% were married couples living together, 16.4% had a female householder with no husband present, and 22.1% were non-families. 17.6% of all households were made up of individuals and 9.0% had someone living alone who was 65 years of age or older. The average household size was 3.84 and the average family size was 4.26.

All content from Kiddle encyclopedia articles (including the article images and facts) can be freely used under Attribution-ShareAlike license, unless stated otherwise. Cite this article:
Watsonville, California Facts for Kids. Kiddle Encyclopedia.