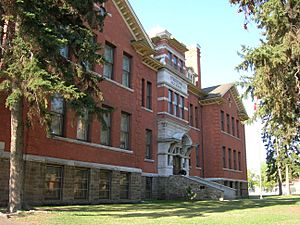 State schools usually mean primary or secondary schools which educate children without charge. They are funded in whole or part by taxation. The term may also refer to public institutions of post-secondary education. State schools have to follow the national curriculum for their country.

State schools may be called public schools outside of England and Wales.

All content from Kiddle encyclopedia articles (including the article images and facts) can be freely used under Attribution-ShareAlike license, unless stated otherwise. Cite this article:
State school Facts for Kids. Kiddle Encyclopedia.