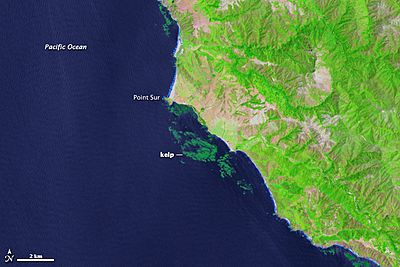 The Monterey Bay National Marine Sanctuary (MBNMS) is a US Federally protected marine area offshore of California's Big Sur and central coast. It is the largest US national marine sanctuary and has a shoreline length of 276 miles (444 km) stretching from just north of the Golden Gate Bridge at San Francisco to Cambria in San Luis Obispo County. Supporting one of the world’s most diverse marine ecosystems, it is home to numerous mammals, seabirds, fishes, invertebrates and plants in a remarkably productive coastal environment. The MBNMS was established in 1992 for the purpose of resource protection, research, education, and public use.

The Monterey Bay National Marine Sanctuary (MBNMS) is one of the largest of a system of 13 National Marine Sanctuaries administered by the National Oceanic and Atmospheric Administration (NOAA), within the U.S. Department of Commerce. It stretches from Rocky Point in Marin County, just north of the Golden Gate Bridge, to the town of Cambria in San Luis Obispo County, and encompasses a shoreline length of 276 miles (444 km) and 6,094 square miles (15,783 km2) of ocean surrounding Monterey Bay. Its seaward Boundary is an average of 30 miles (48 km) offshore, and shoreward boundary the mean high tide. Its area is 6,094 square statute miles or 4,024 square nautical miles. The deepest point is 10,663 feet (3,250 meters) in the Monterey Submarine Canyon, which is deeper than the Grand Canyon. The average ocean surface temperature is 55 °F (13 °C).

The sanctuary provides habitat for 34 species of marine mammals, 94 species of seabirds, 345 species of fish, 4 of turtles, 31 phyla of invertebrates, and more than 450 species of marine algae. Historical sites include 1,276 reported shipwrecks and 718 prehistoric sites. The MBNMS has major programs for research and monitoring, and another for education and outreach

A Coastal Discovery Center is located across the Pacific Coast Highway from the Hearst Castle visitor’s center in San Simeon, California near the William Randolph Hearst Memorial State Beach.

Areas with overlapping jurisdiction include (roughly from north to south): 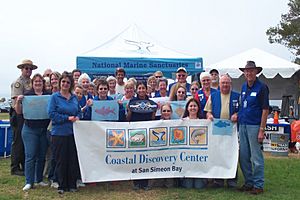 The Sanctuary Integrated Monitoring Network (SIMoN) website was launched in 2003 to collect metadata for their various monitoring projects. In 2012, this information was released as an iOS application to allow visitors better access to the over 4,200 photos that have been collected.

A Marine Sanctuaries Study Bill was first proposed in 1967, with lobbying efforts by the Sierra Club. The Marine Protection, Research, and Sanctuaries Act of 1972 authorized the United States Environmental Protection Agency to monitor off-shore dumping. In 1975, the California Coastal Zone Conservation Commission recommended a marine sanctuary, and in 1976 Santa Cruz County and Monterey County joined the lobbying effort. In 1983 the Ronald Reagan administration dropped the area for consideration as a sanctuary.

In 1988 congress re-authorized the Sanctuaries Act and proposed a sanctuary in Monterey Bay. However, public hearings, with the memory of the 1969 Santa Barbara oil spill, brought protests demanding a larger size. The first Draft Environmental Impact Statement was released in 1990, and a final management plan in June 1992 proposing the extended area. On September 20, 1992 the MBNMS was authorized by legislation proposed by congressman Leon Panetta. It was the largest federal marine sanctuary.

There have been five Superintendents of the MBNMS since its inception:

Since the Gulf of the Farallones National Marine Sanctuary (GFNMS) had been established earlier and had a staff already, the section north of Año Nuevo point near the San Mateo County line was managed by GFNMS from its office in San Francisco. By 1996, Terry Jackson of MBNMS requested to have the management boundaries match the preserve. Ed Ueber of GFNMS saw no reason to change.

There are oil and gas reserves off the coast, but exploration has not been permitted. In 1982, Interior Secretary James G. Watt proposed opening the Central California coast outer continental shelf to oil and gas exploration. California residents and politicians strongly opposed the proposal and it was defeated. In 1990, President George H. W. Bush used an obscure 1953 law to permanently ban oil and gas development in California's Monterey Bay. In November, 2017, President Obama used the same law to ban oil exploration from Hearst Castle to Point Arena in Mendocino County, California.

In July 2017, under the direction of Executive Order 13795 from President Donald Trump, the U.S. Department of Commerce began re-evaluating the protected status of the sanctuary, which includes the Davidson Seamount off the coast of Big Sur. The seamount, at 23 nmi (43 km; 26 mi) long, 7 nmi (13 km; 8.1 mi) wide, and 7,480 feet (2,280 m) high, is one of the largest in the world. Opening the area to oil and gas exploration was opposed by many environmentalists and residents.

All content from Kiddle encyclopedia articles (including the article images and facts) can be freely used under Attribution-ShareAlike license, unless stated otherwise. Cite this article:
Monterey Bay National Marine Sanctuary Facts for Kids. Kiddle Encyclopedia.