Pfeiffer Big Sur State Park is a state park in Monterey County, California, near the area of Big Sur on the state's Central Coast. It covers approximately 1,006 acres (4.07 km2) of land. The park is centered on the Big Sur River. It has been nicknamed a "mini Yosemite." Redwood trees are known to live up to 2,200 years. A tree in the park nicknamed the Colonial Tree is estimated to be between 1,100 and 1,200 years old. 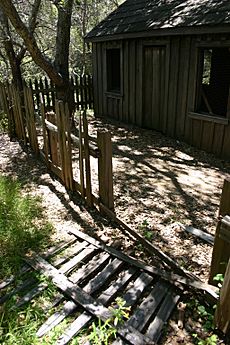 The first known European settler in Big Sur was George Davis, who in 1853 claimed a tract of land along the Big Sur River. He built a cabin near the present day site of the beginning of the Mount Manuel Trail. In 1868, Native Americans Manual and Florence Innocenti bought Davis' cabin and land for $50.

Pfeiffer Big Sur State Park is named after John Pfeiffer, who lived in a cabin on the property beginning in 1884. He was the son of Michael Pfeiffer and Barbara Laquet. The Pfeiffer family immigrated from France. Their son and his family were among the first European settlers in the area. In the winter of 1869, Michael and Barbara Laquet Pfeiffer were on their way to the south coast of Big Sur when they were forced to stop for the season in the Sycamore Canyon area near present-day Big Sur Village. They liked the area so much they decided against moving south again the following spring. They brought four children with them: Charles, John, Mary Ellen, and Julia. They later had four more: William, Frank, Flora, and Adelaide. After the Homestead Act of 1862 was passed by Congress, he filed for patents on his land in 1883 and 1889. Many features in Big Sur are named for the descendants of the Pfeiffers.

In 1930, John Pfeiffer was offered $210,000 for his land by a Los Angeles developer who intended to build a subdivision. Pfeiffer wanted to preserve the land he and his family had grown to love, and instead sold 700 acres (2.8 km2) to the state of California in 1933.

In 1934, the Monterey Bay Area Council built a makeshift Camp Wing within the park, but it was abandoned after the 1937 summer camping season. The next year the Boy Scouts built Camp Esselen at another location within the park. This site was improved until 1945, when limitations of the site, closeness to public camping facilities, and jurisdictional conflicts between the Scouts and the state forced the council to request reimbursement from the state for $8,000 in improvements. The council continued to use the camp until 1953. In 1952, the Scouts began building Camp Pico Blanco, and when that camp was opened in 1954, Camp Esselen was finally closed.

Pfeiffer Big Sur State Park is known for its redwood groves and trail to Pfeiffer Falls. Mud slides caused by the Basin Complex fire necessitated rerouting the Pfeiffer Falls Trail. Reestablishing the old trail, with the wooden foot bridges, was scheduled to begin in 2016.

Pfeiffer Big Sur State Park was damaged by the Basin Complex Fire during June and July 2008, which burned 162,818 acres (658.90 km2) in California. Much of the damage was to the outskirts of the park, however, and the campgrounds were able to reopen at the end of July. The Chalk Fire of September and October, which burned an additional 16,269 acres (65.84 km2), did serious damage to Pfeiffer Big Sur State Park, which was largely closed from September 2008 to May 2009.

All content from Kiddle encyclopedia articles (including the article images and facts) can be freely used under Attribution-ShareAlike license, unless stated otherwise. Cite this article:
Pfeiffer Big Sur State Park Facts for Kids. Kiddle Encyclopedia.