Kids Encyclopedia Facts
Not to be confused with Hurst Castle, Henry VIII's Device Fort near Lymington in England.

Hearst Castle is a National Historic Landmark and California Historical Landmark mansion located on the Central Coast of California, United States. It was designed by architect Julia Morgan, between 1919 and 1947, as a residence for newspaper magnate William Randolph Hearst, who died in 1951. In 1954 it became a California State Park. The site was opened to visitors in 1958. Since that time it has been operated as the Hearst San Simeon State Historical Monument where the estate, and its considerable collection of art and antiques, is open for public tours. Despite its location far from any urban center, the site attracts "millions of travelers each year".

Hearst formally named the estate "La Cuesta Encantada" ("The Enchanted Hill"), but usually called it "the ranch". Hearst Castle and grounds are also sometimes referred to as "San Simeon" without distinguishing between the Hearst property and the adjacent unincorporated area of the same name.

Invitations to Hearst Castle were highly coveted during its heyday in the 1920s and 1930s. The Hollywood and political elite often visited, usually flying into the estate's airfield or taking a private Hearst-owned train car from Los Angeles. Among Hearst's guests were Charlie Chaplin, Cary Grant, the Marx Brothers, Charles Lindbergh, Greta Garbo, Joan Crawford, Clark Gable, James Stewart, Bob Hope, Calvin Coolidge, Franklin Roosevelt, Dolores del Río, and Winston Churchill. While guests were expected to attend the formal dinners each evening, they were normally left to their own dwellings during the day while Hearst directed his business affairs. Since "the Ranch" had so many facilities, guests were rarely at a loss for things to do. The estate's theater usually screened films from Hearst's own movie studio, Cosmopolitan Productions.

Hearst Castle was the inspiration for the "Xanadu" mansion of the 1941 Orson Welles film Citizen Kane, a fictionalization of William Randolph Hearst's career. Hearst Castle was not used as a location for the film, which instead used Oheka Castle in Huntington, New York, as well as buildings in San Diego's Balboa Park. Commercial filming is rare at Hearst Castle and most requests are turned down. Since the property was donated to the state of California only two projects have been granted permission: Stanley Kubrick's Spartacus, which used the castle to stand in as Crassus' villa; and Lady Gaga's music video for "G.U.Y." 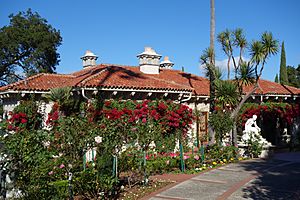 One condition of the Hearst Corporation's donation of the estate was that the Hearst family would be allowed to use it when they wished. Patty Hearst, a granddaughter of William Randolph, related that as a child, she hid behind statues in the Neptune Pool while tours passed by. Although the main estate is now a museum, the Hearst family continues to use an older Victorian house on the property as a retreat – the original house built by George Hearst in the late 19th century. The house is screened from tourist routes by a dense grove of eucalyptus to provide maximum privacy for the guests. In 2001, Patty Hearst hosted a Travel Channel show on the estate, and Amanda Hearst modeled for a fashion photo shoot at the estate for a Hearst Corporation magazine, Town and Country, in 2006.

Hearst Castle joined the National Register of Historic Places on June 22, 1972 and became a United States National Historic Landmark on May 11, 1976.

Hearst Castle was included as one of America's "10 Amazing Castles" by Forbes Travel.com. Forbes said, "Quite possibly the nation's most famous castle, William Randolph Hearst went to great lengths to bring back the best of European architecture – most notably ceilings from churches and monasteries – which were pieced back together in California to create his highly eclectic Central Coast getaway."

Zebras are a popular attraction on the Hearst ranch. They are descendants from Hearst's private zoo.

Hearst Castle is located near the unincorporated community of San Simeon, California, approximately 250 miles (400 km) from both Los Angeles and San Francisco, and 43 miles (69 km) from San Luis Obispo at the northern end of San Luis Obispo County. The estate itself is five miles (eight kilometers) inland atop a hill of the Santa Lucia Range at an altitude of 1,600 feet (490 m). The region is sparsely populated because the Santa Lucia Range abuts the Pacific Ocean, which provides dramatic seaside vistas but few opportunities for development and hampered transportation. The surrounding countryside visible from the mansion remains largely undeveloped. Its entrance is approximately five miles north of Hearst San Simeon State Park.

Hearst Castle was built on Rancho Piedra Blanca that William Randolph Hearst's father, George Hearst, originally purchased in 1865. The younger Hearst grew fond of this site over many childhood family camping trips. He inherited the ranch, which had grown to 250,000 acres (1,012 km2) and 14 miles (23 km) of coastline, from his mother Phoebe Hearst in 1919. Although the large ranch already had a Victorian mansion, the location selected for Hearst Castle was undeveloped, atop a steep hill whose ascent was a dirt path accessible only by foot or on horseback over 5 miles (8 km) of cutbacks.

The Hearst Castle area has a warm-summer mediterranean climate (Köppen csb) that is moderated by its relative proximity to the Pacific coastline. 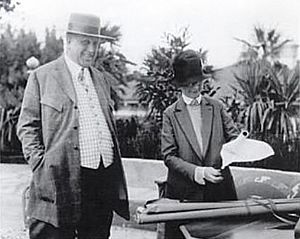 Hearst first approached American architect Julia Morgan with ideas for a new project in April 1915, shortly after he took ownership. Hearst's original idea was to build a bungalow, according to a draftsman who worked in Morgan's office who recounted Hearst's words from the initial meeting:

I would like to build something upon the hill at San Simeon. I get tired of going up there and camping in tents. I'm getting a little too old for that. I'd like to get something that would be a little more comfortable.

After approximately one month of discussion, Hearst's original idea for a modest dwelling swelled to grand proportions. Discussion for the exterior style switched from initial ideas of Japanese and Korean themes to the Spanish Revival that was gaining popularity and that Morgan had furthered with her work on the Los Angeles Herald Examiner headquarters in 1915. Hearst was fond of Spanish Revival, but dissatisfied with the crudeness of the colonial structures in California. Mexican colonial architecture had more sophistication but he objected to its profusion of ornamentation. Turning to the Iberian Peninsula for inspiration, he found Renaissance and Baroque examples in southern Spain more to his tastes. Hearst particularly admired a church in Ronda and asked Morgan to pattern the Main Building towers after it. The Panama-California Exposition of 1915 in San Diego held the closest approaches in California to the look Hearst desired. He decided to substitute a stucco exterior in place of masonry in deference to Californian traditions.

By late summer 1919, Morgan had surveyed the site, analyzed its geology, and drawn initial plans for the Main Building. Construction began in 1919 and continued through 1947 when Hearst stopped living at the estate due to ill health. Morgan persuaded Hearst to begin with the guest cottages, because the smaller structures could be completed more quickly.

Hearst Castle as seen from the southwest

The estate is a pastiche of historic architectural styles that its owner admired in his travels around Europe. Hearst was a prolific buyer who did not so much purchase art and antiques to furnish his home as he did build his home to get his bulging collection out of warehouses. This led to incongruous elements, such as the private cinema, whose walls were lined with shelves of rare books. The floor plan of the Main Building is chaotic due to his habit of buying centuries-old ceilings, which dictated the proportions and decor of various rooms. 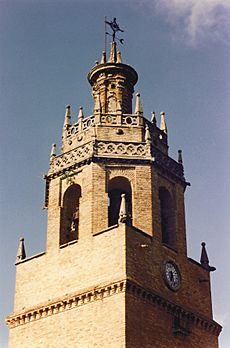 Tower of the Church of Santa María la Mayor, in Ronda, Spain, which served as inspiration for the Hearst Castle towers. 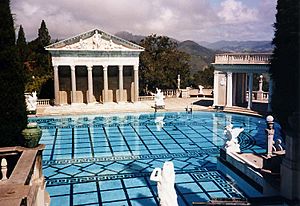 The Neptune Pool at Hearst Castle was rebuilt three times to suit its owner's tastes. Its centerpiece is the façade of an ancient Roman temple Hearst imported to California.

One highlight of the estate is the outdoor Neptune Pool, located near the edge of the hilltop, which offers an expansive vista of the mountains, ocean and the main house. Due to drought conditions and leaks in the pool, it is now drained. The Neptune Pool patio features an ancient Roman temple front, transported wholesale from Europe and reconstructed at the site. Hearst was an inveterate tinkerer, and would tear down structures and rebuild them on a whim. For example, the Neptune Pool was rebuilt three times before Hearst was satisfied. As a consequence of Hearst's persistent design changes, the estate was never completed in his lifetime.

During Hearst's ownership, a private power plant supplied electricity to the remote location. Most of the estate's chandeliers have bare light bulbs, because electrical technology was so new when Hearst Castle was built.

All content from Kiddle encyclopedia articles (including the article images and facts) can be freely used under Attribution-ShareAlike license, unless stated otherwise. Cite this article:
Hearst Castle Facts for Kids. Kiddle Encyclopedia.