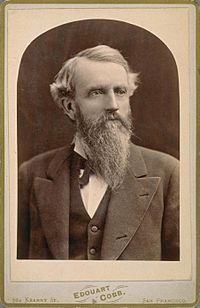 George Hearst (1820 – 1891) was a successful prospector during the Gold Rush. He was born in Missouri into a family of farmers. He went west during the Gold Rush. By the 1860s he owned many copper and silver mines. His mining business grew bigger. In 1880 he bought the San Francisco Examiner to promote his political opinions and himself. He favored the two-party system. He said to Mark Twain in San Francisco that he was a Republican so his little boy, William Randolph Hearst, would become a Democrat. In 1886 he became a state senator in California. Later, his son bought more and more newspapers, which were often accused of being sensational.

All content from Kiddle encyclopedia articles (including the article images and facts) can be freely used under Attribution-ShareAlike license, unless stated otherwise. Cite this article:
George Hearst Facts for Kids. Kiddle Encyclopedia.