Colma (Ohlone for "Springs") is a small incorporated town in San Mateo County, California, on the San Francisco Peninsula in the San Francisco Bay Area. The population was 1,507 at the 2020 census. The town was founded as a necropolis in 1924.

With most of Colma's land dedicated to cemeteries, the population of the dead—not specifically known but speculated to be around 1.5 million—outnumbers that of the living by a ratio of nearly a thousand to one. This has led to Colma being called "the City of the Silent" and has given rise to a humorous motto, formerly featured on the city's website: "It's great to be alive in Colma".

The most common origin of the name "Colma" is the Ohlone word mean "springs" or "many springs".

There are several other proposed origins of Colma. Erwin Gudde's California Place Names states seven possible sources of the town's being called Colma: William T. Coleman (a local landowner), Thomas Coleman (a local resident), misspelling of Colmar in France, misspelling of Colima in Mexico, a re-spelling of an ancient Uralic word meaning death, a reference to James Macpherson's Songs of Selma, and two Ohlone possibilities, one meaning "moon" and one meaning "springs".

Before 1872, Colma was designated as "Station" or "School House Station", the name of its post office in 1869.

The community of Colma was formed in the 19th century as a collection of homes and small businesses along El Camino Real and the adjacent San Francisco and San Jose Railroad line. Several churches, including Holy Angels Catholic Church, were founded in these early years. The community founded its own fire district, which serves the unincorporated area of Colma north of the town limits, as well as the area that became a town in 1924.

Heinrich (Henry) von Kempf moved his wholesale nursery here in the early part of the 20th century, from the land where the Palace of Fine Arts currently sits. The business was growing, and thus required more space for von Kempf's plants and trees. von Kempf then began petitioning to turn the Colma community into an agricultural township. He succeeded and became the town of Colma's first treasurer.

A panoramic view of Colma, California, looking down from San Bruno Mountain

Colma became the site for numerous cemeteries after San Francisco outlawed new interments within city limits in 1900, then evicted all existing cemeteries in 1912. In the 1910s many of the roads to Colma were not maintained. Bodies were transported by street cars in San Francisco down Valencia Street in the Mission District; which resulting in many mortuaries and funeral homes in this location for quick access to Colma. Approximately 150,000 bodies were moved between 1920 and 1941 at a cost of $10 per grave and marker. Those for whom no one paid the fee were reburied in mass graves, and the markers were recycled in various San Francisco public works. The completion of the relocation was delayed until after World War II. The main rail line between San Francisco and San Jose running through Colma had been bypassed in 1907 for a route closer to the San Francisco Bay shoreline, and the former main line was repurposed as a branch line to move coffins to Colma. Decades later, the right-of-way for the rail line through Colma was purchased by BART for use in the San Francisco International Airport extension project.

The Town of Lawndale was incorporated in 1924, primarily at the behest of the cemetery owners with the cooperation of the handful of residents who lived closest to the cemeteries. The residential and business areas immediately to the north continued to be known as Colma. Because another California city named Lawndale already existed, in Los Angeles County, the post office retained the Colma designation, and the town changed its name back to Colma in 1941. 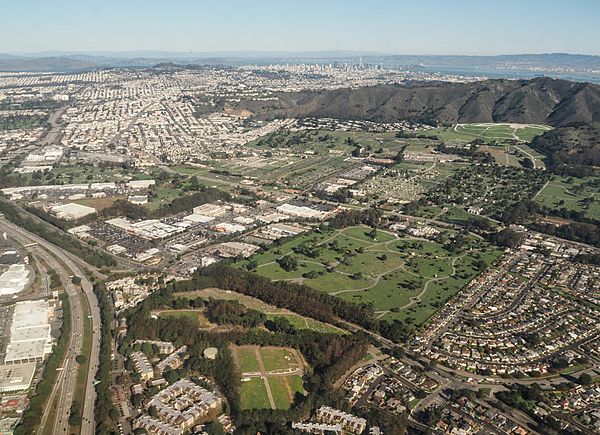 Aerial view of Colma, city of cemeteries, from the south

Many, if not most, of the well-known people who died in San Francisco since the first cemeteries opened there have been buried or reburied in Colma, with an additional large number of such burials in Oakland's Mountain View Cemetery. Some notable people interred in Colma include: 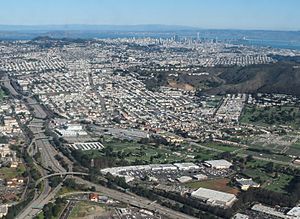 Originally, Colma's residents were primarily employed in occupations related to the many cemeteries in the town. Since the 1980s, however, Colma has become more diversified, and a variety of retail businesses and automobile dealerships has brought more sales tax revenue to the town government. In 1986, 280 Metro Center opened for business in Colma; it is now recognized as the world's first power center.

According to the United States Census Bureau, the town has a total area of 1.9 sq mi (4.9 km2), all land. The town's 17 cemeteries comprise approximately 73% of the town's land area.

Colma is situated on the San Francisco Peninsula at the highest point of the Merced Valley, a gap between San Bruno Mountain and the northernmost foothills of the Santa Cruz Mountain Range. The foothills and eastern flanks of the range are composed largely of poorly consolidated Pliocene-Quaternary freshwater and shallow marine sediments that include the Colma and Merced Formations, recent slope wash, ravine fill, colluvium, and alluvium. These surficial deposits unconformably overlay the much older Jurassic to Cretaceous-aged Franciscan Assemblage. An old landfill about 135 deep existed at the site developed by the 260,000 sq ft (24,000 m2) mixed-use Metro Center.

Colma Creek flows through the city as it makes its way from San Bruno Mountain to San Francisco Bay.

Colma station on BART and SamTrans buses serve the city.

Colma has one private school, Holy Angels School, a Catholic school for preschool through 8th grade.

There were 329 households, out of which 36.2% had children under the age of 18 living with them, 57.1% were married couples living together, 11.9% had a female householder with no husband present, and 25.5% were non-families. 17.3% of all households were made up of individuals, and 10.0% had someone living alone who was 65 years of age or older. The average household size was 3.47 and the average family size was 3.92.

All content from Kiddle encyclopedia articles (including the article images and facts) can be freely used under Attribution-ShareAlike license, unless stated otherwise. Cite this article:
Colma, California Facts for Kids. Kiddle Encyclopedia.