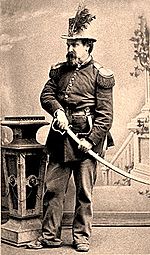 Joshua Abraham Norton, or Emperor Norton (1819? - 1880) was a man who declared himself Emperor of the United States and Protector of Mexico. He was born in London to John and Sarah Norton. but no one knows his actual birthday or what year he was born in.

Before he became emperor he was a citizen of San Francisco. Norton spent a lot of his early life in South Africa. Before he was emperor he made a living by being a businessman. He lost a lot of money by trying to control the rice market in San Francisco by buying all the rice he could find. This did not work because ships came with more rice.

Emperor Norton I died on January 8, 1880. The reason of his death is unknown. He collapsed on the corner of California and Grant on his way to a lecture. The next day, he had his funeral. During Emperor Norton’s funeral, a solar eclipse took place. The whole city came to his funeral, and all of them mourned. Emperor Norton is now buried at Woodlawn Cemetery. This is what his gravestone says:

NORTON I
EMPEROR
OF THE UNITED STATES
AND
PROTECTOR OF MEXICO
JOSHUA A. NORTON
1816 - 1880

Writer Mark Twain based the character of The King in The Adventures of Huckleberry Finn on Norton.

All content from Kiddle encyclopedia articles (including the article images and facts) can be freely used under Attribution-ShareAlike license, unless stated otherwise. Cite this article:
Emperor Norton Facts for Kids. Kiddle Encyclopedia.