Most of the valley faces San Francisco Bay, affording bay views from higher levels. South San Francisco has mild winters and dry cool summers. The hills to the west shield the city from much of the fog that prevails in neighboring areas.

The population has tripled since World War II with the opening of such subdivisions as Buri Buri, Winston Manor and Westborough on the slopes west of El Camino; it grew from 4,411 in 1920 to 67,009 in 2014.

The city is noted for the South San Francisco Hillside Sign on Sign Hill, which rises to the north of the city, with large white letters that proclaim "South San Francisco, The Industrial City". The sign, a tribute to the city's industrial past, is listed on the National Register of Historic Places.

The city of South San Francisco was originally conceived as an industrial suburb and was promoted by representatives of the Beef Trust, a group including some of the country's largest meat packing firms. A city plan was put forward in 1888 by Gustavus Franklin Swift, founder of the Swift & Company meat packing firm. The plan called for multiple individual meat-packing companies with a shared stockyard, as well as a residential area for employees. Swift proposed the name South San Francisco based on South Chicago and South Omaha, where the Swift company already had plants.

In 1890 Peter E. Iler of Omaha, Nebraska, an agent of the Beef Trust, purchased Lux's property, and in 1891 ownership was transferred to the South San Francisco Land and Improvement Company. The area was divided into industrial and residential districts, and the company installed lighting, sewer connections, and water distributions in the residential areas. A second corporation, eventually known as the Western Meat Company, set up stock yards and meat packing facilities on 80 acres (32 ha) of bayfront property; the facility opened in 1892. Other industries soon moved in, including a pottery works, two brick companies, the paint manufacturer W.P. Fuller & Company, the South San Francisco Lumber Company, and the Pacific Jupiter Steel Company.

The city of South San Francisco was incorporated in 1908 following a dispute with San Mateo County, which had blocked the construction of a smelter on San Bruno Point which was supported by the locals. Following incorporation additional industries moved into the town, including two steel mills. A new City Hall was opened on November 11, 1920.

By the 1920s the city was "the smokestack capital of the Peninsula." South San Francisco proudly called itself "The Industrial City", a motto immortalized in 1923 by a huge sign on a hillside overlooking the city. Industry remained the city's main economic focus through the 1950s. During the depression the city maintained 35 industrial operations, including four meat-packing businesses, six iron or steel plants, a smelter for precious metals, seven equipment manufacturers of various kinds, two large paint factories, three other chemical works, and three food packing establishments. During World War II shipbuilding also became a significant operation.

At the end of the war the city's focus shifted away from "smokestack industries" toward light industry, warehousing, and residential development. The major manufacturers closed, and new development was focused on office parks, housing, high-rise hotels, and yacht harbors. The biotechnology giant Genentech opened in 1976, leading to South San Francisco's new identity as "the birthplace of biotechnology". The population grew to 63,632 as of the 2010 census.

South San Francisco, along with most of the Bay Area, enjoys a mild Mediterranean climate (Köppen climate classification Csb), with warm, dry summers and cool, relatively wet winters. The micro climate of South San Francisco is dominated by wind from the nearby Pacific Ocean, which typically keeps the daytime temperatures quite cool year round, even during the summer months. January is the coolest month with August being the warmest month. The record highest temperature of 106 °F (41 °C) and was recorded on June 14, 1961. The record lowest temperature of 24 °F (-4.4 °C) was recorded on December 9, 1972. The normal annual precipitation is 20.59 inches (52.3 cm).

There were 20,118 households out of which 39.2% had children under the age of 18 living with them, 51.8% were married couples living together, 11.2% had a female householder with no husband present, and 28.5% were non-families. 21.9% of all households were made up of individuals and 8.0% had someone living alone who was 65 years of age or older. The average household size was 4.05 and the average family size was 4.51.

South San Francisco is a middle class and working class city. However, that image is quickly changing as many luxury homes have been built, particularly at the foot of the mountain that divides Brisbane and South San Francisco, in the area in recent years to take advantage of the city's close proximity to downtown San Francisco, the bio-tech industry, and the peninsula. There are also developments of luxury condominiums in the Westborough district and on El Camino Real near the South San Francisco BART station.

On June 4, 2012, the Water Emergency Transportation Authority began a ferry service between Oyster Point Marina and the east bay cities of Oakland at Jack London Square and Alameda at the Main Street ferry terminal. The ferry service operates during weekday commute hours only.

The city is served by several free shuttle services open to the general public:

The city is served by two major north-south freeways, U.S. Route 101 (the Bayshore Freeway), along the San Francisco Bay, and Interstate 280, along the hills of the Santa Cruz Mountains.

The city's small downtown and several residential subdivisions, such as Mayfair Village, Sunshine Gardens, Avalon Park, Winston Manor, West Winston Manor, and Rancho Buri Buri, are located west of Highway 101, while the area east of Highway 101 is dominated by industrial complexes interspersed with modern office parks, particularly near the Oyster Point Marina on San Francisco Bay. The extreme western portions of the city near Interstate 280 sit along a hillside and offer views of San Francisco Bay. This area is known to local residents as Westborough. The southern part of the city, closest to the airport, is home to a large number of car repair shops, airport parking lots, and airport hotels.

Grand Avenue, from Chestnut to Airport, is considered downtown South San Francisco, with various small shops and restaurants. Grand Avenue is host to a plethora of stores, one of which is Bronstein Music, a well-known local music store that has been around since 1946. City Hall is located on Grand Avenue, which, to the residents of South City, is known simply as "Grand." Grand also runs perpendicular with one of the city's other well-known streets, Linden, which connects San Bruno to Highway 101. Chestnut Avenue connects Hillside, the northern bordering street at the foot of San Bruno Mountain, to Westborough Blvd, and subsequently to one of the neighborhoods known as Westborough.

Points of interest and recreation 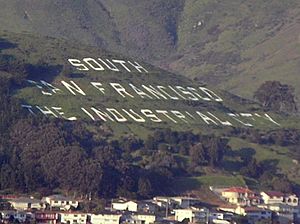 South San Francisco is not known as a tourist destination, but it is a key landmark visible to anyone who travels along the San Francisco Peninsula or through the nearby San Francisco International Airport. Sign Hill, near San Bruno Mountain State Park, displays huge letters on its mountainside which reads "SOUTH SAN FRANCISCO THE INDUSTRIAL CITY." The letters are made of painted concrete and sit flush along the hillside (in contrast to the raised steel letters of the Hollywood Sign in Los Angeles). The sign was put up in the 1920s, and in 1996 was given a place in the National Register of Historic Places as an outstanding example of early 20th-Century "civic boosterism", a tribute to the past importance of heavy industry to the regional economy, and recognizing significant contributions the area made during World Wars I and II.

Sign Hill is now a city park which provides hikers with access to the letters; the park includes 30 acres (12 ha) of open space and almost 2 miles (3.2 km) of hiking trails. At the top of Sign Hill, a tall pole with electric lights serves as an electric Christmas tree, which is typically lit from the day after Thanksgiving until January 6. The "tree" is visible for many miles at night. In 2008, the pole was modified to hold a vertical number 100, celebrating South San Francisco's 100th year as an incorporated city. For Memorial Day, Independence Day & Veterans Day, the pole flies an American flag. An airport weather-station is sited next to the flagpole.

Originally called the Cabot, Cabot and Forbes Tower when it was constructed in 1967 as the centerpiece of their industrial park, this striking 92-foot-tall sculpture by Lucia and Aristides Demetrios is one of the world's largest aeolian harps. Named for Aeolus, the Greek god of the wind, and invented by the 17th-century polymath Athanasius Kircher, an aeolian harp is a passive instrument played by the movement of the wind. Fabricated from steel manufactured at Bethlehem Steel. It was designed to “take advantage of the viewer’s motion… constantly changing, presenting a series of graceful ellipses and a shifting light pattern.”

A unique opportunity was created when BART expanded down the Peninsula to create a "linear park" on the swath of undeveloped land on top of the tube. Running from Colma to Millbrae, South San Francisco's portion is three miles long, running through the center of town from the South San Francisco BART Station to the San Bruno BART Station. The Class I bicycle and pedestrian trail is a 10" wide asphalt pathway with 2' decomposed granite shoulders, irrigated for low-maintenance landscaping, with safety lighting, signalized intersections where the trail crosses Spruce and Chestnut Avenues, and in-ground flashing lights at Orange Avenue. Also, a dog park is located adjacent from Orange Park along the pathway. The new park is called Centennial Way to commemorate the City's 100th birthday in 2008.

The downtown area along Grand Avenue has buildings from the city's earliest days. Galli's Sanitary Bakery has been in business since 1909, while – a few blocks down – the 1905 Plymire-Schwartz house was the North Peninsula's first hospital; it is now operated by the Historical Society (which also has a Historical Society Museum in the old California Water Service Company administration building at 80 Chestnut Avenue). The 1920 city hall is modelled after Independence Hall in Philadelphia, while next to it sits the original 1916 Carnegie Library. The 1912 Metropolitan Hotel (built by the Meat Packers Consortium) now has a mural depicting SSF History high on its east wall. Bertolucci's is an Italian restaurant that has also been around almost since the birth of the city, located in close proximity to downtown South San Francisco and is easily seen from highway 101. Fine WPA murals of SSF may be seen in the Linden Avenue Post Office and the Grand Avenue library.

The South San Francisco Public Library (part of the Peninsula Library System) has served the city since 1917 with branches in the Grand Avenue civic center and on West Orange Avenue just off of Westborough.

The South San Francisco Farmers Market is at Orange Memorial Park from May through October, 9am to 1pm. The market offers only California-grown products sold directly to consumers.

Every Holiday season residents of Parkway Estates (a three-street development built in the mid-1980s off Chestnut Avenue) decorate their houses and yards with Christmas lights. This display is open to the public, is well-known holiday attraction, and hundreds of visitors arrive every holiday season. Lilac Lane (off of Palm Avenue) was an earlier seasonal decoration cooperative which began in the 1960s, at one point it was the destination of the city's Santa Claus parade, and the spot where the local Chamber of Commerce Santa passed out toys from R.Dakin (formerly headquartered in SSF) to hundreds of children. Few of the original residents survive and decorative technology today has far surpassed the 60's era so, in the 21st century, Lilac Lane has become a backwater.

South San Francisco has one bowling alley named Brentwood Bowl due to its proximity to the Brentwood Neighborhood on El Camino Real. The city is home to the private California Golf & Country Club, next to its public library, bounded by Ponderosa Road and Westborough.

All content from Kiddle encyclopedia articles (including the article images and facts) can be freely used under Attribution-ShareAlike license, unless stated otherwise. Cite this article:
South San Francisco, California Facts for Kids. Kiddle Encyclopedia.