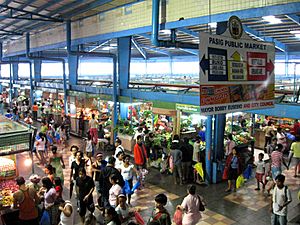 Pasig, officially the City of Pasig, (Tagalog: Lungsod ng Pasig), or simply known as Pasig City, is a 1st class highly urbanized city in Metro Manila, Philippines. According to the 2015 census, it has a population of 755,300 people.

Located along the eastern border of Metro Manila, Pasig is bordered on the west by Quezon City and Mandaluyong; to the north by Marikina; to the south by Makati, the municipality of Pateros, and Taguig; and to the east by the municipalities of Cainta and Taytay in the province of Rizal.

A formerly rural settlement, Pasig is primarily residential and industrial, but has been becoming increasingly commercial in recent years, particularly after the construction of the Ortigas Center business district in its west. The city is home to the Roman Catholic Diocese of Pasig, based in Pasig Cathedral, a landmark built around the same time as the town's foundation in 1573.

Pasig was formerly part of Rizal province before the formation of Metro Manila, the National Capital Region of the country. The seat of government of Rizal was hosted in Pasig at the old Rizal Provincial Capitol until a new capitol was opened in Antipolo, within Rizal's jurisdiction in 2009. However it remains the de jure, or official capital of the province.

All content from Kiddle encyclopedia articles (including the article images and facts) can be freely used under Attribution-ShareAlike license, unless stated otherwise. Cite this article:
Pasig Facts for Kids. Kiddle Encyclopedia.