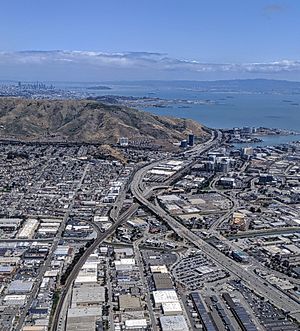 In this aerial view of South San Francisco, Colma Creek is seen crossing west–east beneath the Caltrain tracks and U.S. Route 101.

The creek has a tributary stream named Twelvemile Creek, which joins it from the southwest along Westborough Blvd. in South San Francisco.

The upper bridge across Colma Creek on the Bog Trail, San Bruno Mountain State and County Park, looking into the headwaters in the eucalyptus grove above

The large delta the creek once supported was an important stop for migratory waterfowl and other wildlife. However, like many urban creeks, Colma Creek has been surrounded by flood control walls, buried in some parts, and had much of its large delta filled in by developers. Most of the lower parts of the creek are devoid of native vegetation due to the flood control project, reducing the habitat of the endangered California clapper rail and other species that use the creek.

The headwaters of the creek are lined with non-native trees like eucalyptus, cypress, and Himalayan blackberry, displacing the native riparian plants like dogwood and willow. The creek sometimes runs dry due to the non-native vegetation lowering the water table at the source. In 2005, Shelterbelt Builders developed a habitat restoration plan to return the creek to its former state by removing invasive and non-native plants and replanting native, riparian plants at the source. In addition, in South San Francisco, new wetland was created to mitigate wetland lost to floodwall construction and improvements. The California clapper rail is expected to reinhabit the new salt and freshwater wetland, along with other species displaced by the flood control works.

All content from Kiddle encyclopedia articles (including the article images and facts) can be freely used under Attribution-ShareAlike license, unless stated otherwise. Cite this article:
Colma Creek Facts for Kids. Kiddle Encyclopedia.