Sutter's Mill was a sawmill, owned by 19th-century pioneer John Sutter, where gold was found, setting off the California Gold Rush, a major event of the history of the United States. It was located on the bank of the South Fork American River in Coloma, California and is today part of the Marshall Gold Discovery State Historic Park.

On January 24, 1848, James Wilson Marshall, a carpenter originally from New Jersey, found flakes of gold in the American River at the base of the Sierra Nevada Mountains near Coloma, California. At the time, Marshall was working to build a water-powered sawmill owned by John Sutter. On February 2, 1848, the Treaty of Guadalupe Hidalgo was signed in Mexico City which transferred the American Southwest to the United States. When the news got out about the gold, people from all over the world headed for California, speeding statehood and permanently transforming the territory. During the next seven years, approximately 300,000 people came to California (half by land and half by sea) to seek their fortunes from either mining for gold or selling supplies like food, clothing, burros, lumber, picks, and shovels to the prospectors.

Henry Bigler and Azariah Smith, like other workers at the mill, were veterans of the Mormon Battalion, and wrote about their experience in journals. Bigler recorded the actual date when gold was discovered, January 24, 1848, in his diary. This gold find started the California Gold Rush the next year.

The discovery of gold at Sutter's Mill caused a large mass of migration to California. After the finding of gold California changed dramatically, going from 14,000 non-natives to an estimated 85,000 newcomers to California in just a year. Many from the eastern states dropped everything they were doing to head West in hopes of becoming rich. There was significant mass immigration of fortune-seekers from many countries, including roughly 60,000 Chinese immigrants, 7,000 Mexicans, and tens of thousands from many other countries. There were roughly 81,000 newcomers in 1849 and another 91,000 in 1850. Many died from turf wars over mine claims and diseases that broke in the towns as sanitation was poor. Small villages and towns had turned into bustling cities with all kinds of people. Towns were popping up overnight all over California starting in 1849 into the early '50s. The infrastructure for the number of people that had come was not there. These towns lacked sewerage, police, fire departments. Fires were a regular occurrence and wiped out whole towns. The gold rush attracted immigrants from all over the world, who brought with them their unique culture and values. These immigrants formed communities throughout California, and added to the rich fabric that makes up the state. 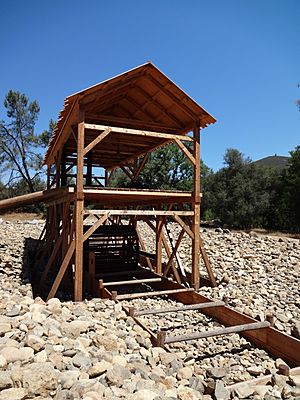 The site of the mill is located on the South Fork American River. Marshall Gold Discovery State Historic Park is registered as California Historical Landmark number 530. The current Sutter's Mill is a replica of the original building. It was built based on Marshall's own drawings and an early day photo of the mill.

The original flake of gold discovered at the mill is currently at the Smithsonian Institution.

All content from Kiddle encyclopedia articles (including the article images and facts) can be freely used under Attribution-ShareAlike license, unless stated otherwise. Cite this article:
Sutter's Mill Facts for Kids. Kiddle Encyclopedia.