Coloma (formerly, Colluma and Culloma) is a census-designated place in El Dorado County, California, USA. It is approximately 36 miles (58 km) northeast of Sacramento, California. Coloma is most noted for being the site where James W. Marshall found gold in the Sierra Nevada, at Sutter's Mill on January 24, 1848, leading to the California Gold Rush. Coloma's population is 529.

The settlement is a tourist attraction known for its ghost town and the centerpiece of the Marshall Gold Discovery State Historic Park. Coloma was designated a National Historic Landmark District on July 4, 1961.

Coloma grew around Sutter's Mill following the finding of gold. A post office was established in 1849 under the name Culloma, changing to Coloma in 1851.

One of Coloma's earliest settlers was Silas Sanderson (1824–1886), who went on to become the 7th Chief Justice of California. 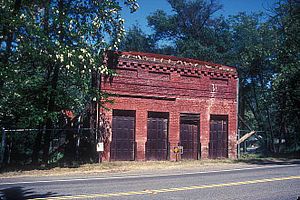 While some people still live in the area, Coloma is considered something of a ghost town because civic buildings such as the jail have been abandoned and left to decay, and other buildings from its boom era (1847-1852) have been converted into museums and other historical displays. The tailrace of Sutter's Mill remains, along with a nearby reconstruction.

In reality the meaningfulness of the township of Coloma has dissipated as residents who live in the wider Coloma Valley area generally share a community spirit.

The town currently has approximately 300 inhabitants. The local economy is predominately agriculture and tourism. Of particular note is the rafting industry as the South Fork American River is one of the most popular white water trips in North America. 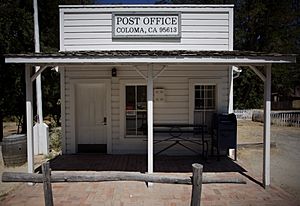 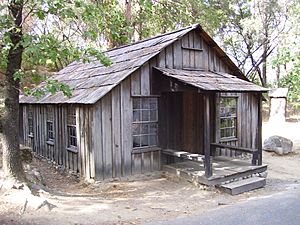 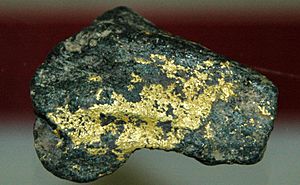 According to the Köppen Climate Classification system, Coloma has a warm-summer Mediterranean climate, abbreviated "Csa" on climate maps.

All content from Kiddle encyclopedia articles (including the article images and facts) can be freely used under Attribution-ShareAlike license, unless stated otherwise. Cite this article:
Coloma, California Facts for Kids. Kiddle Encyclopedia.