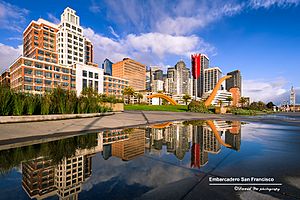 Rincon Park and Cupid's Span with the San Francisco skyline and The Embarcadero in the background.

The Embarcadero is the eastern waterfront and roadway of the Port of San Francisco, San Francisco, California, along San Francisco Bay. It was constructed on reclaimed land along a three mile long engineered seawall, from which piers extend into the bay. It derives its name from the Spanish verb embarcar, meaning "to embark"; embarcadero itself means "the place to embark". The Central Embarcadero Piers Historic District was added to the National Register of Historic Places on November 20, 2002.

The Embarcadero right-of-way begins at the intersection of Second and King Streets near Oracle Park, and travels north, passing under the San Francisco–Oakland Bay Bridge. The Embarcadero continues north past the Ferry Building at Market Street, Pier 39, and Fisherman's Wharf, before ending at Pier 45. A section of The Embarcadero which ran between Folsom Street and Drumm Street was formerly known as East Street.

For three decades, until it was torn down in 1991, the Embarcadero Freeway dominated the area. The subsequent redevelopment and restoration efforts have, according to the National Trust for Historic Preservation, "contributed to a remarkable urban waterfront renaissance", with the Embarcadero Historic District serving as a "major economic engine for the Bay Area".

San Francisco's shoreline historically ran south and inland from Clarke's Point below Telegraph Hill to present-day Montgomery Street and eastward toward Rincon Point, enclosing a cove named Yerba Buena Cove. As the city grew, the cove was filled. Over fifty years a large offshore seawall was built and the mudflats filled, creating what today is San Francisco's Financial District. The San Francisco Belt Railroad, a short line railroad for freight, ran along The Embarcadero. The roadway follows the seawall, a boundary first established in the 1860s and not completed until the 1920s.

During the early-20th century when the seaport was at its busiest and before the construction of the Bay Bridge, piers 1, 1½, 3 and 5 were dedicated chiefly to inland trade and transport. These connections facilitated the growth of communities in the Sacramento- and San Joaquin Valleys and fostered California's agricultural business.

During World War II, San Francisco's waterfront became a military logistics center; troops, equipment and supplies left the Port in support of the Pacific theater. Almost every pier and wharf was involved in military activities, with troop ships and naval vessels tied up all along the Embarcadero.

However, after the completion of the Bay Bridge and the rapid decline of ferries and the Ferry Building, the neighborhood fell into decline. The transition to container shipping, which moved most shipping to Oakland, led to further decline. Automobile transit efforts led to the Embarcadero Freeway being built in the 1960s. This improved automobile access to the Bay Bridge, but detracted aesthetically from the city. For 30 years, the highway divided the waterfront and the Ferry Building from downtown. It was torn down in 1991, after being severely damaged in the 1989 Loma Prieta earthquake. 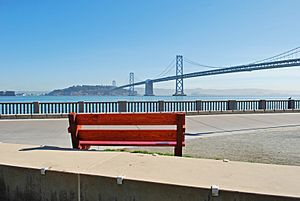 After the freeway had been cleared, massive redevelopment began as a grand palm-lined boulevard was created, squares and plazas were created and/or restored, and Muni's N Judah and T Third Street and F Market & Wharves lines were extended to run along it, with the N and T lines going south from Market Street to Fourth and King Streets (at AT&T Park and the Caltrain station) and the F line going north from Market to Fisherman's Wharf. The Muni also relaunched the ‘E’ line which was historically a seasonal service connecting Fishermans' Wharf to the Caltrain Depot, the line now operates weekends between Jefferson and Jones adjacent Fisherman's Wharf and Fourth and King streets near the Caltrain terminus.

The sidewalk along the waterfront between China Basin and Fisherman's Wharf was named "Herb Caen Way..." after the death of celebrated local columnist Herb Caen in 1997. The three dots, or ellipsis, deliberately are included in honor of columnist Herb Caen's Pulitzer Prize winning writing style.

A large public sculpture, Cupid's Span by Claes Oldenburg and Coosje van Bruggen, was installed in 2002 along the Rincon Park area. Resembling Cupid's bow and arrow with the arrow implanted in the ground, the artists stated that the statue was inspired by San Francisco's reputation as the home port of Eros, hence the stereotypical bow and arrow of Cupid.

In 2016, the Embarcadero was named on the list of "11 Most Endangered Historic Places" in the US by the National Trust for Historic Preservation, citing "the dual natural threats of sea-level rise and seismic vulnerability" to the seawall.

Embarcadero Station, a BART and Muni Metro subway station, is located at the foot of Market Street, one block from The Embarcadero. While not in the original system plans, it has become the most destined BART station. As it is an infill station, the design is unique among the Market Street Subway. 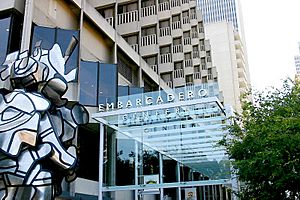 Embarcadero Center consists of four 30 to 45 story buildings and the Hyatt Regency San Francisco, located between the Ferry Building and the foot of Market Street. Until 2001, there was a viewing deck on top of the Embarcadero Center. During the winter holidays, the edges of all four buildings are illuminated, the effect resembling the outlines of four giant books on a shelf.

At the eastern end of Market Street is Justin Herman Plaza, opened in 1972, named for M. Justin Herman, executive director of the SF Redevelopment Agency from 1959 to 1971. It is frequented by nearby office workers on lunch break and by families with small children. Summer features free daytime concerts while winter features an ice skating rink. The Critical Mass (cycling) bicycle rides have gathered in the plaza for over twenty years. The controversial Vaillancourt Fountain dominates one end of the plaza.

Right along the Embarcadero Center is the Embarcadero YMCA, the city's flagship branch of a group of a dozen locales. The center features the unique Youth Chance High School, an alternative high school that is a magnet for troubled students from throughout the Bay Area.

All content from Kiddle encyclopedia articles (including the article images and facts) can be freely used under Attribution-ShareAlike license, unless stated otherwise. Cite this article:
Embarcadero (San Francisco) Facts for Kids. Kiddle Encyclopedia.