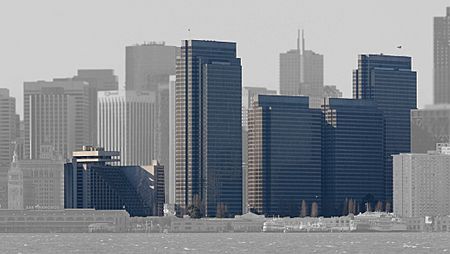 Highlighted: Hyatt Regency at left and four towers. Not shown: Le Méridien hotel, located behind the other buildings, toward the right of the rightmost highlighted tower.

Embarcadero Center is a commercial complex of five office towers, two hotels, a shopping center with more than 125 stores, bars, and restaurants, two movie theaters, and a fitness center on three levels. There is an outdoor ice skating rink during winter months. Embarcadero Center sits on a 9.8-acre (4.0 ha) site largely bounded by Clay (to the north), Sacramento (to the south), Battery (to the west), and the Embarcadero (to the east), in the financial district of San Francisco.

Developed by Trammell Crow, David Rockefeller and John Portman, construction began with Tower One in 1971, with the last off-complex extension, Embarcadero West, completed in 1989. The two extension buildings are west of Battery.

All content from Kiddle encyclopedia articles (including the article images and facts) can be freely used under Attribution-ShareAlike license, unless stated otherwise. Cite this article:
Embarcadero Center Facts for Kids. Kiddle Encyclopedia.