Embarcadero Plaza, previously known as Justin Herman Plaza from its opening in 1972 until 2017, is a 1.23-acre (0.50 ha) plaza near the intersection of Market and Embarcadero in San Francisco's Financial District, in the U.S. state of California. It is owned by Boston Properties, who acquired the neighboring Embarcadero Center office, hotel, and retail complex in 1998.

The design of Embarcadero Plaza is credited to Don Carter (principal-in-charge) with help from Mario J. Ciampi and John Bolles. The original concept was devised by Lawrence Halprin, who described five distinct districts of Market Street in the 1962 report What to do About Market Street starting at the Embarcadero and ending at Van Ness. In retrospect, Halprin's vision for Market was described as a "pedestrian-oriented series of linked civic spaces" which were later realized as the open spaces running from Embarcadero Plaza (in the northeast) to UN Plaza in the southwest. Halprin described an early concept for what he called Ferry Building Park in the 1962 Market Street report, proposing to bring San Francisco Bay and the original harbor closer to Market, as "the [Embarcadero] Freeway and the Ferry building have created an impenetrable barrier, at street level, to one of San Francisco's most priceless assets – its marine setting" and offering ways to minimize the visual and aural impact of the double-decked freeway. 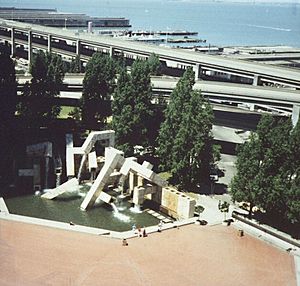 The controversial Vaillancourt Fountain dominates the northeast end of the plaza. The large plaza could accommodate large crowds, and the roaring fountain was designed to drown out noise from the Embarcadero Freeway, which was completed in 1959 and ran along the east side of the plaza from its opening in 1972 until the freeway was torn down in 1991. La Chiffonnière is also installed in the plaza, closer to Market.

A bocce ball court was built using private donations in 2010.

The monthly Critical Mass bicycle rides have started from the plaza since September 1992. Since 2006, on Valentine's Day, the plaza is the site of the Great San Francisco Pillow Fight, an unsponsored annual pillow fight flash mob.

All content from Kiddle encyclopedia articles (including the article images and facts) can be freely used under Attribution-ShareAlike license, unless stated otherwise. Cite this article:
Justin Herman Plaza Facts for Kids. Kiddle Encyclopedia.