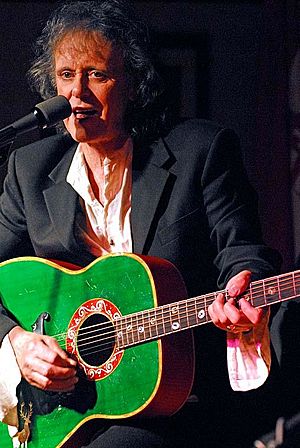 Donovan Phillips Leitch (born May 10, 1946 in Maryhill, Glasgow, Scotland) is a Scottish-born pop singer and guitarist, who was popular in the 1960s. Early in his career he was compared to Bob Dylan, but he developed his own musical style, which included elements of jazz and Indian music. (Donovan and Dylan met during 1965, and became friends.)

Donovan was one of the first pop musicians to denounce the use of drugs.

After the 1960s, Donovan's music was not as popular as it had been, but it is remembered now as part of the flower power era. Many of his songs now appear in television commercials. He continued to make albums regularly through the 1980s, and sometimes in the 1990s. He also continued to tour, and some of his later albums are of live performances. He published an autobiography, The Hurdy Gurdy Man, during 2005.

All content from Kiddle encyclopedia articles (including the article images and facts) can be freely used under Attribution-ShareAlike license, unless stated otherwise. Cite this article:
Donovan Facts for Kids. Kiddle Encyclopedia.