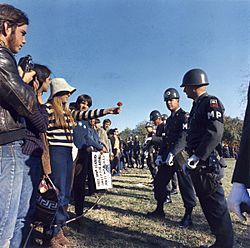 A demonstrator offers a flower to military police at an anti-Vietnam War protest at The Pentagon in Arlington, Virginia, 21 October 1967

"Flower power" was a 1960s slogan, used by hippies and other people who were against war and violence. It was a symbol of passive resistance and non-violence ideology.

These people used flowers as a symbol of life, of love, and of peace. They wore flowers, made art with flowers and images of them, and gave them away often. Hippies sometimes placed flowers in the rifle barrels of marching soldiers.

Songs such as San Francisco, Be Sure to Wear Flowers in Your Hair by folk musicians The Mamas & the Papas were associated with flower power.

All content from Kiddle encyclopedia articles (including the article images and facts) can be freely used under Attribution-ShareAlike license, unless stated otherwise. Cite this article:
Flower power Facts for Kids. Kiddle Encyclopedia.