The sitar (Hindi: /Sanskrit: सितार, Urdu: ستار) is a plucked string instrument. It uses sympathetic strings along with a long hollow neck and a gourd resonating chamber to make a rich sound with complex harmonic resonance. It is used throughout India. 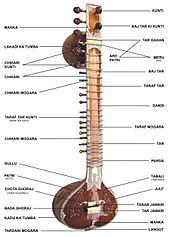 Anatomy of a sitar

A sitar can have 18, 19, 20, or 21 strings. Six or seven of these are played strings which run over curved, raised frets, and the remainder are sympathetic strings (tarb, also known as taarif or tarafdaar) which run underneath the frets and resonate in sympathy with the played strings. These strings are generally used to set the mood of a raga at the very beginning of a presentation. The frets, which are known as pardā or thaat, are movable, allowing fine-tuning. The played strings run to tuning pegs on or near the head of the instrument, while the sympathetic strings, which are a variety of different lengths, pass through small holes in the fretboard to engage with the smaller tuning pegs that run down the instrument's neck.

The Gandhaar-pancham sitar (used by Vilayat Khan and his disciples) has six playable strings, whereas the Kharaj-pancham sitar, invented by legendary Sitar Ratna Ustad Rahimat Khan, founder of Dharwad Gharana of Sitar, later was used in the Maihar gharana, to which Ravi Shankar belonged, and other gharanas such as Bishnupur, has seven. Three of these (or four on a Ghandar-pancham sitar or "Vilayat Khan"-style, or Etawa gharana), called the chikaari, simply provide a drone; the rest are used to play the melody, though the first string (baajtaar) is most used.

The instrument has two bridges: the large bridge (badaa goraa) for the playing and drone strings and the small bridge (chota goraa) for the sympathetic strings. Its timbre results from the way the strings interact with the wide, sloping bridge. As a string reverberates its length changes slightly as its edge touches the bridge, promoting the creation of overtones and giving the sound its distinctive tone. The maintenance of this specific tone by shaping the bridge is called jawari. Many musicians rely on instrument makers to adjust this.

The bridges are fixed to the main resonating chamber, or kaddu, at the base of the instrument. Some sitars have a secondary resonator, the tumbaa, near the top of the hollow neck.

Materials used in construction include teak wood or tun wood (Cedrela toona), which is a variation of mahogany, for the neck and faceplate (tabli), and calabash gourds for the resonating chambers. The instrument's bridges are made of deer horn, ebony, or very occasionally from camel bone. Synthetic material is now common as well.

All content from Kiddle encyclopedia articles (including the article images and facts) can be freely used under Attribution-ShareAlike license, unless stated otherwise. Cite this article:
Sitar Facts for Kids. Kiddle Encyclopedia.