Early pictures of the balalaika show it had between two and six strings, like some Central Asian instruments. Frets on earlier balalaikas were made of animal gut and tied to the neck so that they could be moved around by the player. 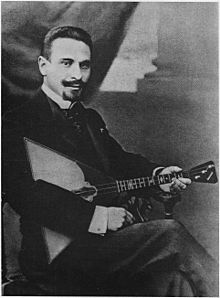 The balalaika was improved by a Russian, Vasily Vasil'yevich Andreev. He had heard peasants on his farm playing badly made instruments. Andreev wanted to improve the instrument and use it for concerts. He spent the rest of his life working on this instrument with help from two violin makers and a carpenter. They improved the soundboard, which made it louder. He came up with the idea of the prima balalaike, sekunda, alto, bass and controbass balalaika. He then spent several years writing and arranging music for groups of balalaikas to play. The first public performance by the Ensemble of Balalaika Players took place in 1888. After the Russian Revolution, the Communist Party encouraged the playing of the instrument and large balalaika orchestras were started.

All content from Kiddle encyclopedia articles (including the article images and facts) can be freely used under Attribution-ShareAlike license, unless stated otherwise. Cite this article:
Balalaika Facts for Kids. Kiddle Encyclopedia.