Casey Kasem (born Kemal Amin Kasem; April 27, 1932– June 15, 2014) was an American radio personality, stand-up comedian, actor, voice artist, and comedian. He is known for his many voice roles in cartoons and for being a public radio personality.

Kasem was born Kemal Amin Kasem in Detroit, Michigan, on April 27, 1932, to Lebanese immigrant parents. They settled in Michigan, where they worked as grocers. Kasem graduated from Northwestern High School in Detroit and Wayne State University.

Kasem's career began in the radio business in the 1950s in Flint, Michigan. He then made his first movie appearance in Easy Rider in 1967.

Kasem did the voice of many advertisements, has done many voices for Sesame Street, and is the voice of 'Shaggy' for the animated television show Scooby-Doo.

Kasem retired in 2009 because of old age and health concerns. 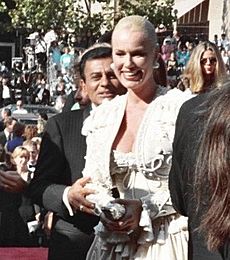 Kasem and his wife Jean at the 1993 Emmy Awards

On May 12, 2014, Kasem was declared missing by a Los Angeles court judge ordered an investigation for his whereabouts. Soon after, Kasem was found alive in Washington state, having moved out of the United States.

Kasem suffered from Parkinson's disease and an early form of dementia.

On June 6, 2014, Kasem was in critical but stable condition at a hospital in Washington state hospital, receiving antibiotic treatment from blood pressure and bedsores. He also suffers from Lewy body disease, the most common type of progressive dementia after Alzheimer's and has been bed-ridden.

Kasem died in Gig Harbor, Washington from complications of dementia and sepsis, aged 82. On August 14 it was reported in the Norwegian newspaper Verdens Gang that Kasem was going to be buried in Oslo. The funeral administration of Oslo, Norway confirmed that Kasem was buried at Vestre Gravlund in Oslo on December 16, 2014.

All content from Kiddle encyclopedia articles (including the article images and facts) can be freely used under Attribution-ShareAlike license, unless stated otherwise. Cite this article:
Casey Kasem Facts for Kids. Kiddle Encyclopedia.