Cass Elliot (born Ellen Naomi Cohen; September 19, 1941 – July 29, 1974), also known as Mama Cass, was an American singer and actress, best known as a member of The Mamas & the Papas. After the group broke up, she released five solo albums. In 1998, Elliot, John Phillips, Denny Doherty, and Michelle Phillips were inducted into the Rock and Roll Hall of Fame for their work as The Mamas & the Papas.

Ellen Naomi Cohen was born in Baltimore, Maryland, the daughter of Philip Cohen (d: 1962) and his wife Bess (née Levine, 1915–1994). Both her parents were the children of Jewish immigrants from the Russian Empire. Her father owned a small business (lunch wagon), and her mother was a trained nurse. Elliot had a brother Joseph and a younger sister Leah, who also became a singer as a member of the Coyote Sisters. The Cohens later moved to Alexandria, Virginia.

Elliot adopted the name "Cass" in high school, possibly borrowing it from actress Peggy Cass, as Denny Doherty tells it. In any case, it was "Cass", not "Cassandra". She assumed the surname Elliot some time later, in memory of a friend who had died. Elliot attended George Washington High School, along with Jim Morrison of The Doors.

While still attending George Washington High School, Elliot became interested in acting and was cast in a school production of the play The Boy Friend. She left high school shortly before graduation and moved to New York City to further her acting career (as recounted in the lyrics to "Creeque Alley"). 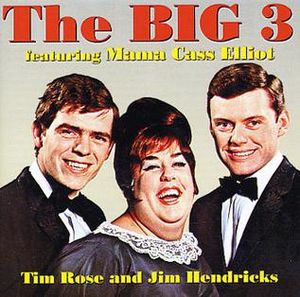 After leaving high school to pursue an entertainment career in New York, Elliot toured in the musical The Music Man but lost the part of Miss Marmelstein in I Can Get It for You Wholesale to Barbra Streisand in 1962. Elliot would sometimes sing while working as a cloakroom attendant at The Showplace in Greenwich Village, but she didn't pursue a singing career until she moved to the Washington, D.C. area to attend American University (not Swarthmore College, as mentioned in the biographical song "Creeque Alley").

America's folk music scene was on the rise when Elliot met banjoist and singer Tim Rose and singer John Brown, and the three began performing as The Triumvirate. In 1963, James Hendricks replaced Brown, and the trio was renamed The Big 3. Elliot's first recording with The Big 3 was "Winkin', Blinkin' and Nod", released by FM Records in 1963. In 1964, the group appeared on an "open mic" night at The Bitter End in Greenwich Village, billed as "Cass Elliot and the Big 3", followed onstage by folk singer Jim Fosso and bluegrass banjoist Eric Weissberg (who became famous eight years later for performing "Dueling Banjos" on the soundtrack for Deliverance (1972)).

Tim Rose left The Big 3 in 1964, and Elliot and Hendricks teamed with Canadians Zal Yanovsky and Denny Doherty to form The Mugwumps. This group lasted eight months, after which Cass performed as a solo act for a while. In the meantime, Yanovsky and John Sebastian co-founded The Lovin' Spoonful, while Doherty joined The New Journeymen, a group that also included John Phillips and his wife Michelle. In 1965, Doherty persuaded Phillips that Elliot should join the group, which she did while she and the group members were vacationing in the Virgin Islands.

A popular legend about Elliot is that her vocal range was improved by three notes after she was hit on the head by some copper tubing while walking through a construction site behind the bar where The New Journeymen were playing in the Virgin Islands. Elliot confirmed the story in a 1968 interview with Rolling Stone magazine, saying,

It's true, I did get hit on the head by a pipe that fell down and my range was increased by three notes. They were tearing this club apart in the islands, revamping it, putting in a dance floor. Workmen dropped a thin metal plumbing pipe and it hit me on the head and knocked me to the ground. I had a concussion and went to the hospital. I had a bad headache for about two weeks and all of a sudden I was singing higher. It's true. Honest to God.

However, friends later said that the pipe story was a less embarrassing explanation for why John Phillips had kept her out of the group for so long, the real reason being that he considered her too fat.

The Mamas & the Papas

With two female members, The New Journeymen needed a new name. According to Doherty, Elliot had the inspiration for the band's new name; as written on his website:

We're all just lying around vegging out watching TV and discussing names for the group. The New Journeymen was not a handle that was going to hang on this outfit. John was pushing for The Magic Cyrcle. Eech, but none of us could come up with anything better, then we switch the channel and, hey, it's the Hells Angels on the Carson show... And the first thing we hear is: "Now hold on there, Hoss. Some people call our women cheap, but we just call them our Mamas." Cass jumped up: "Yeah! I want to be a Mama." And Michelle is going: "We're the Mamas! We're the Mamas!" OK. I look at John. He's looking at me going: "The Papas?" Problem solved. A toast! To The Mamas and the Papas. Well, after many, many toasts, Cass and John are passed out."

Doherty also said that the occasion marked the beginning of his affair with Michelle Phillips. Elliot was in love with Doherty and was displeased when he told her of the affair. Doherty has said that Elliot once proposed to him, but that he was so stoned at the time that he could not even respond.

Elliot was known for her sense of humor and optimism, and was considered by some to be the most charismatic member of the group. Her powerful, distinctive voice was a major factor in their success. She is best remembered for her vocals on the group's hits "California Dreamin'", "Monday, Monday", "Words of Love", and the solo "Dream a Little Dream of Me", which the group recorded in 1968 after learning about the death of Fabian Andre, one of the men who co-wrote it, whom Michelle Phillips had met years earlier. Elliot's version is noteworthy for its contemplative pace, whereas almost all earlier recordings of "Dream a Little Dream of Me" (including one by Nat King Cole and another by Ozzie Nelson) had been up-tempo versions—the song having been written in 1931 as a dance tune.

The Mamas & the Papas continued to record to meet the terms of their record contract. Their final album was released in 1971. 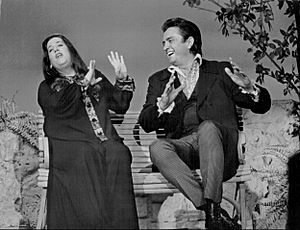 After the breakup of The Mamas & the Papas, Elliot embarked on a solo singing career. Her most successful recording during this period was 1968's "Dream a Little Dream of Me" from her solo album of the same name, released by Dunhill Records, though it had originally been released earlier that year on the album The Papas & the Mamas Presented By The Mamas and the Papas. 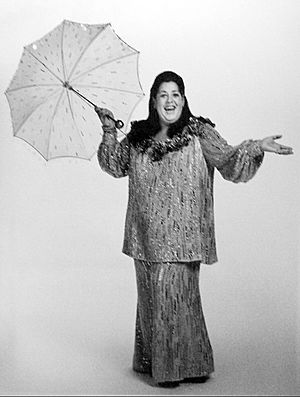 Photo from the special Don't Call Me Mama Anymore

Elliot appeared in two television variety specials: The Mama Cass Television Show (ABC, 1969) and Don't Call Me Mama Anymore (CBS, 1973). She was a regular guest on TV talk shows and variety shows in the early 1970s, including The Mike Douglas Show, The Andy Williams Show, Hollywood Squares, The Johnny Cash Show, The Smothers Brothers Comedy Hour, and The Carol Burnett Show, and was a guest panelist for a week on the game show Match Game '73. She guest-hosted for Johnny Carson on The Tonight Show and appeared as a guest on the show 13 other times. She also appeared on and co-hosted The Music Scene on ABC and was featured on the first The Midnight Special on NBC.

She performed the title song "The Good Times Are Comin'" during the opening sequence of the 1970 film Monte Walsh, starring Lee Marvin and Jack Palance. In 1972, she made three appearances on the variety series The Julie Andrews Hour. Her final appearance on the show was the Christmas installment that aired on Wednesday, December 20, 1972. In December 1978, four years after Elliot's death, the episode was rebroadcast on syndicated stations as a Christmas special called Merry Christmas With Love, Julie. However, all of Elliot's solos were deleted from the syndicated prints. In 2009, a complete videotape of The Julie Andrews Hour Christmas Show was donated to The Paley Center For Media in New York, with all of Elliot's numbers intact.

She also sang the jingle "Hurry on down to Hardee's, where the burgers are charco-broiled" for Hardee's fast-food advertisements.

Throughout the early 1970s, Elliot continued her acting career, as well. She had a featured role in the movie Pufnstuf (1970) and made guest appearances on TV's The New Scooby-Doo Movies, Young Dr. Kildare, Love, American Style, and The Red Skelton Show, among others.

In 1973, Elliot hired as her manager Allan Carr, who was also managing the careers of Tony Curtis, Ann-Margret, and Peter Sellers. Carr felt Elliot needed to leave pop and rock music altogether and head into the cabaret circuit, so a show was put together comprising old standards along with a few new songs written for her by friends. The act included Elliot and two male singers who served as backing singers and sidekicks during the musical numbers. The title of the show was Don't Call Me Mama Anymore, named after one of the songs written by Elliot's friend Earle Brown. The song was born out of Elliot's frustration with being identified as "Mama Cass".

The show debuted in Pittsburgh on February 9, 1973. Elliot felt ready to tackle Las Vegas once again and premiered at the Flamingo. This time, she received rave reviews. The Las Vegas Sun wrote, "Cass Elliot, making a strong point that she is no longer Mama Cass, has a good act serving notice that she is here to stay. The audience was with her all the way... no empty seats anywhere." She then took her act to higher-echelon casinos and swankier nightclubs in cities throughout the country. 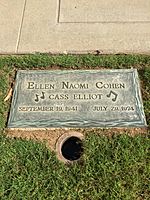 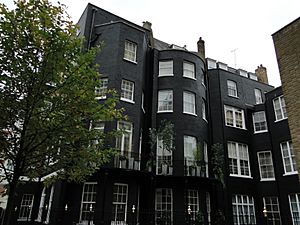 On April 22, 1974, Elliot collapsed before an appearance on the The Tonight Show Starring Johnny Carson. Elliot played it off in interviews as nothing more than exhaustion.

Elliot performed two weeks of concerts at the London Palladium later that summer, at the height of her solo career. Many claimed that all of these shows sold out, but she was often playing to a less than full house after the earliest dates. She called Michelle Phillips after the final concert on July 28, elated that she had received standing ovations each night. She then retired for the evening and died in her sleep, at age 32, due to "heart failure due to fatty myocardial degeneration due to obesity" according to Keith Simpson the forensic pathologist conducting her autopsy. A drug screen that was part of the forensic autopsy further showed no drugs in her system. Elliot died in Flat 12, 9 Curzon Place (later Curzon Square), Shepherd Market, Mayfair, London, which was on loan from singer/songwriter Harry Nilsson. Four years later, The Who's drummer Keith Moon died in the same flat. Elliot was buried in Mount Sinai Memorial Park Cemetery in Los Angeles.

The Mamas and the Papas

"-" indicates the album did not chart or was not released in that territory.

All content from Kiddle encyclopedia articles (including the article images and facts) can be freely used under Attribution-ShareAlike license, unless stated otherwise. Cite this article:
Cass Elliot Facts for Kids. Kiddle Encyclopedia.