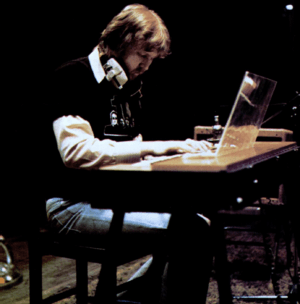 "Without her" is one of his early hits. This number is nowadays considered one of his standards as Blood, Sweat & Tears did later an jazzy cover on their album. His biggest hits were during the late 1960s and the 1970s. His songs include "Me And My Arrow", "Coconut", "Cuddly Toy", "Spaceman", and "One". "One" was also a hit for the band Three Dog Night. Nilsson's two most famous songs were "Without You" and "Everybody's Talkin'". These songs were written by other people. "Without You" has been re-recorded many times by other singers. It was written by Peter Ham and Tom Evans of Badfinger. "Everybody's Talkin'" was used in the 1969 movie Midnight Cowboy. The song was written by Fred Neil.

Nilsson recorded a tribute to The Beatles on his first album. He used lines from fifteen of their songs in one cover version of "You Can't Do That". Derek Taylor, who worked for the Beatles, sent them copies of the album, and Nilsson became a friend of the band. He later shared a house with John Lennon and Ringo Starr. They worked together on each other's music.

Nilsson also wrote a cartoon movie named The Point!. It was broadcast on ABC. It was about tolerance and diversity. The Point! was later turned into a musical. One production of the musical starred former Monkees Micky Dolenz and Davy Jones. The Monkees had recorded two of Nilsson's songs, "Cuddly Toy" and "Daddy's Song", after they met him through producer Chip Douglas.

The movie You've Got Mail uses several of Nilsson's songs in its soundtrack.

All content from Kiddle encyclopedia articles (including the article images and facts) can be freely used under Attribution-ShareAlike license, unless stated otherwise. Cite this article:
Harry Nilsson Facts for Kids. Kiddle Encyclopedia.