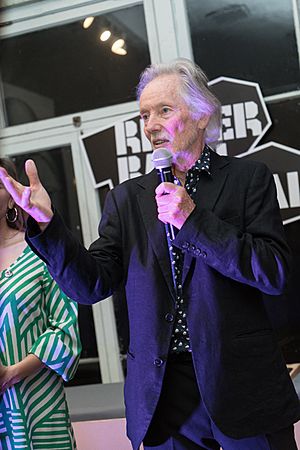 In an art exhibition with Klaus Voormann, 2018

Klaus Voormann (born April 29, 1942) is a German artist and musician. He was born and raised in Berlin. He was a friend of The Beatles. He met them when they played in Hamburg, where he was going to art school.

Voormann designed the cover of their Revolver album, and later did cover art for The Beatles Anthology and some of George Harrison's solo records. He also played bass guitar with Manfred Mann, and on records by John Lennon, George Harrison and Ringo Starr, and their friend Harry Nilsson.

He also became a record producer, and produced the band Trio, whose biggest hit was "Da Da Da", which was used later in a Volkswagen television commercial.

All content from Kiddle encyclopedia articles (including the article images and facts) can be freely used under Attribution-ShareAlike license, unless stated otherwise. Cite this article:
Klaus Voormann Facts for Kids. Kiddle Encyclopedia.