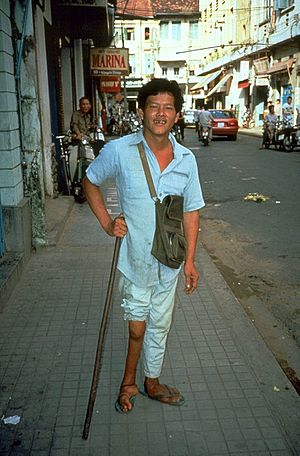 Poliomyelitis, or polio, is a virus that causes a serious disease. It is spread from person to person.

Most of the time, polio has no symptoms unless the polio virus gets into the blood. It is uncommon for the virus to enter the brain or spinal cord. If this does happen, it can cause muscles to become paralyzed. Some people get better from the paralysis. Others will be disabled. Depending on which muscles have been affected, these people may need a mobility aid or a wheelchair; they may have difficulty using their hands; or they may even have trouble breathing.

Vaccination with polio vaccines could stop the disease all over the world. Organizations like the World Health Organization have been trying to vaccinate as many people as possible against polio. Vaccinations have eliminated polio from most countries in the world.

All content from Kiddle encyclopedia articles (including the article images and facts) can be freely used under Attribution-ShareAlike license, unless stated otherwise. Cite this article:
Poliomyelitis Facts for Kids. Kiddle Encyclopedia.