The Central African Republic (CAR) (French: République centrafricaine or Centrafrique Sango Ködörösêse tî Bêafrîka), is a landlocked country in Central Africa. It is mostly a plateau or high, flat piece of land about 941 metres above the sea. The CAR covers a land area of about 620,000 square kilometres (240,000 sq mi), and has an estimated population of about 4.4 million as of 2008. Bangui is the capital city.

There are thick forests in the south, and these are home to rare gorillas. This part of Africa also has Pygmies.

Other important towns are Bouar, Zinga, and Ouadda. Its southern border is the Ubangi River. There are 3.8 million people in the C.A.R. Most of them belong to the Banda and Baya tribes. The main language is French but some people speak the national language of Sango.

The people mostly grow their own food, but sometimes droughts (long spells without any rain) make this difficult. The C.A.R. also has diamond and uranium mines. It sells these, as well as cotton, coffee, and timber to other countries to make money.

The country was ruled by France until 1960 when it became independent.

The country has not been very stable since then, with multiple wars with itself, and corruption. 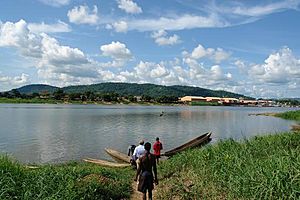 Ubangi River on the outskirts of Bangui.

Much of the Central African Republic is flat, or rolling plateau savanna. It is typically about 500 metres (1,640 ft) above sea level. Most of the northern half is in the World Wildlife Fund's East Sudanian savanna ecoregion. In the northeast are the Fertit Hills. There are scattered hills in the southwest part of the country. To the northwest is the Yade Massif, a granite plateau with an altitude of 1,143 feet (348 m).

At 622,941 square kilometres (240,519 sq mi), the Central African Republic is the world's 42nd-largest country. It is about the size of the Ukraine, and is somewhat smaller than the US state of Texas.

Much of the southern border is formed by tributaries of the Congo River. The Mbomou River in the east merges with the Uele River to form the Ubangi River. In the west, the Sangha River flows through part of the country. The eastern border is along the edge of the Nile River watershed.

Forest covers up to 8% of the land. The densest parts are in the south. The forest is highly diverse. It includes commercially important species of Ayous, Sapelli and Sipo. The deforestation rate is 0.4% per year, and lumber poaching is commonplace.

The prefectures of the Central African Republic are:

The two economic prefectures are Nana-Grébizi and Sangha-Mbaéré. The commune is Bangui.

The largest cities in the Central African Republic are:

All content from Kiddle encyclopedia articles (including the article images and facts) can be freely used under Attribution-ShareAlike license, unless stated otherwise. Cite this article:
Central African Republic Facts for Kids. Kiddle Encyclopedia.