Languages of Africa facts for kids

The languages of Africa include more than 3,000 languages. These languages include native languages (languages that come from Africa) and colonial languages, which were brought to Africa by colonists from Europe. The continent has the highest concentration of languages in the world. At least 30% of the world's languages come from and are spoken in Africa.

Over the years, many African languages have died out and become extinct. This happens for several reasons, including wars and genocide by other African tribes. Other languages were abandoned, or its speakers disappeared. 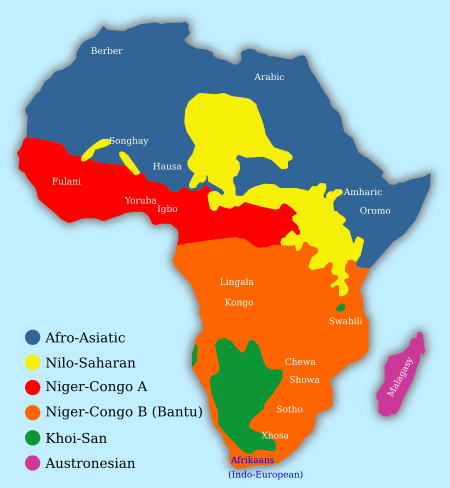 A map showing the six traditional language families in Africa.

There are more than 3,000 languages spoken in Africa. These languages are grouped into several major language families. Linguists do not agree about which groupings are "correct" and valid.

Most linguists organize the African languages into four major language families. These are:

This classification of languages is based on the research of the linguist Joseph Greenberg, who published The Languages of Africa in 1963.

The African languages were traditionally (historically) organized into six language families. Today, some linguists doubt that some of these groupings are valid. The six traditional families are:

All content from Kiddle encyclopedia articles (including the article images and facts) can be freely used under Attribution-ShareAlike license, unless stated otherwise. Cite this article:
Languages of Africa Facts for Kids. Kiddle Encyclopedia.