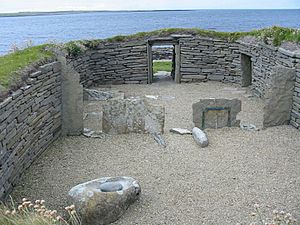 The Neolithic revolution was the first agricultural revolution. It was a gradual change from nomadic hunting and gathering communities and bands to agriculture and settlement. This period is described as a "revolution" because it changed the way of life of communities which made the change. It occurred in different prehistoric human societies at different times. Many societies changed 9–7 thousand years ago.

The term refers to the general time period over which these developments took place. It also applies to the changes which took place: the adoption of early farming techniques, crop cultivation, and the domestication of animals. The Neolithic Revolution is important for developments in social organization and technology.

The Neolithic revolution led to living in permanent or semi-permanent settlements. Because of this fewer people led a nomadic lifestyle. To be able to know who the crops grown belonged to, the concept of land ownership was developed. The natural environment was changed, population densities grew, and people ate more vegetable and cereal foods in their diet. Hierarchies developed in society. Grain was stored, and could be traded. Surplus production from good crop yields helped societies survive bad years. 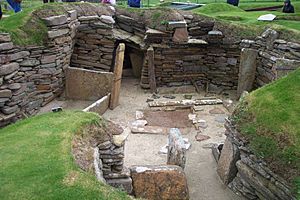 When humans started to domesticate crops, and certain animals such as dogs, goats, sheep, and cattle, human society changed. Because people now grew crops and raised livestock they no longer needed to move around. They could build better settlements. Their diet also changed. It included more oats and vegetables. People also started to keep and manage some foods - it was not advisable to eat all grain seeds, because then there would be no seeds left to plant the next year. Also, as there were surpluses in some years, these could be traded for other goods with other people.

These changes happened in several places of the world, independently. They did not happen in the same order though. The earliest farming societies in the Near East did not use pottery. It is still unclear to what extent plants were domesticated in Britain, or if permanently settled communities existed at all. Early Japanese societies used pottery before developing agriculture.

In the Paleolithic there were many different human species. According to current research, only the modern human reached the Neolithic though.

Vere Gordon Childe gave the name Neolithic Revolution to this process in the 1920s. He thought that it was as important as the Industrial Revolution (which happened in the 18th and 19th century).

Theories about the Neolithic revolution 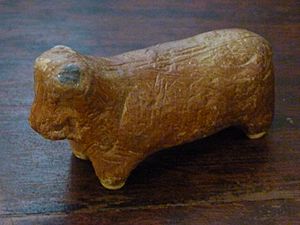 There are different theories why this transition could have happened:

Reasons why it happened 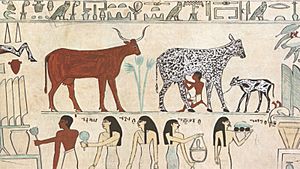 According to Harland, there are three main reasons why the Neolithic revolution happened:

All content from Kiddle encyclopedia articles (including the article images and facts) can be freely used under Attribution-ShareAlike license, unless stated otherwise. Cite this article:
Neolithic revolution Facts for Kids. Kiddle Encyclopedia.