Knap of Howar facts for kids 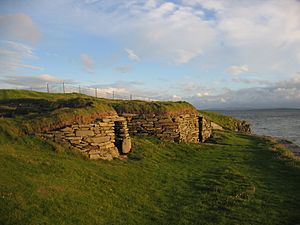 The Knap of Howar on the island of Papa Westray in Orkney, Scotland is a Neolithic farmstead which may be the oldest preserved stone house in northern Europe. Radiocarbon dating shows that it was occupied from 3700 BC to 2800 BC, earlier than the similar houses in the settlement at Skara Brae on the Orkney Mainland. 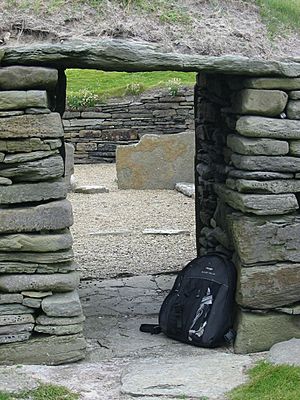 Looking back through the low entrance doorway into the main house, a visitor's backpack gives an idea of scale.

The farmstead consists of two rounded rectangular thick-walled buildings with very low doorways facing the sea. The larger and older structure is linked by a low passageway to the other building, which has been interpreted as a workshop or a second house. They were constructed on an earlier midden, and were surrounded by midden material which has protected them.

There are no windows; the structures were presumably lit by fire, with a hole in the roof to let out smoke. Though they now stand close to the shore, they would have originally lain inland. The shore shows how the local stone splits into thin slabs, giving a ready source of construction material.

The walls still stand to an eaves height of 1.6 metres (5 ft 3 in), and the stone furniture is intact giving a vivid impression of life in the house. Fireplaces, partition screens, beds and storage shelves are almost intact, and post holes were found indicating the roof structure.

Evidence from the middens shows that the inhabitants were keeping cattle, sheep and pigs, cultivating barley and wheat and gathering shellfish as well as fishing for species which have to be line caught using boats.

Finds of finely-made and decorated Unstan ware pottery link the inhabitants to chambered cairn tombs nearby and to sites far afield including Balbridie and Eilean Domhnuill. The name Howar is believed to be derived from Old Norse word haugr meaning mounds or barrows.

The site is in the care of Historic Scotland.

All content from Kiddle encyclopedia articles (including the article images and facts) can be freely used under Attribution-ShareAlike license, unless stated otherwise. Cite this article:
Knap of Howar Facts for Kids. Kiddle Encyclopedia.