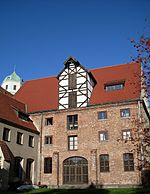 A granary is a building or room (usually in a barn) that holds grain. It keeps the grain dry so it does not spoil, and keeps it away from animals that would eat it. They are an important part of a farm. If the grain is lost, eaten by pests, or ruined, the farmers might starve or lose much money.

Granaries have been around as long as humans have had agriculture and in some cases even before we planted crops. The earliest ones are over 11,000 years old and stored grains that grew in the wild and were collected by hand. Granaries are still used today. It is still in a good condition .

Granaries usually have few, if any, windows. They are often built off the ground, to keep out water and mice. They will have a door near the bottom to get the grain out, and usually have an opening up high to put the grain in.

All content from Kiddle encyclopedia articles (including the article images and facts) can be freely used under Attribution-ShareAlike license, unless stated otherwise. Cite this article:
Granary Facts for Kids. Kiddle Encyclopedia.