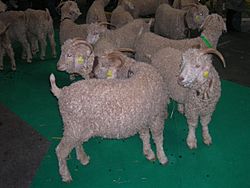 The Angora goat (Turkish: Ankara keçisi) is a breed of domestic goat. It is named for Ankara, Turkey. The Angora produces fine quality white or coloured mohair which is very similar to wool. Angoras were imported into Europe in 1554 by Charles V, Holy Roman Emperor. In 1765 they were imported into Spain and about 1785 they were introduced into France. None of these were able to set up a successful mohair production. But in 1838 Angoras were successfully introduced in South Africa. Today, the Union of South Africa is one of the world's top mohair producers. 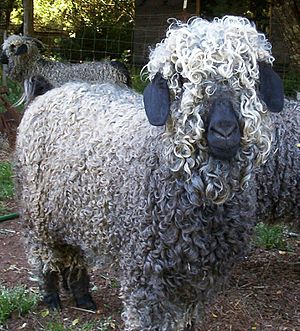 Angora goats are normally white, but colored Angoras are growing in popularity

The fleece taken from an Angora goat is called mohair. A single goat produces between four and five kilograms of hair per year. Angoras are shorn twice a year. Angoras, despite their coats, are not directly related to sheep.

Turkey, Argentina, the United States, and South Africa are the top producers of mohair. Secondary producers include New Zealand and Australia. For a long time, Angora goats were bred for their white coats. In 1998, the Colored Angora Goat Breeders Association was set up to promote breeding of colored Angoras. Now, Angora goats produce white, black (deep black to greys and silver), red (the color fades significantly as the goat gets older), and brownish fibers.

Angora goats are more susceptible to external parasites (ectoparasites) than similar animals, as their coats are denser. They are not prolific breeders, nor are they considered very hardy, being particularly delicate during the first few days of life. Further, Angoras have high nutritional requirements due to their rapid hair growth. A poor-quality diet will curtail mohair development.

All content from Kiddle encyclopedia articles (including the article images and facts) can be freely used under Attribution-ShareAlike license, unless stated otherwise. Cite this article:
Angora goat Facts for Kids. Kiddle Encyclopedia.