Jonathan Niven Cryer (born April 16, 1965) is an American actor and television director. Born into a show business family, Cryer made his motion picture debut as a teenaged photographer in the 1984 romantic comedy No Small Affair; his breakout role came in 1986, playing "Duckie" Dale in the John Hughes-written film Pretty in Pink. In 1998, he wrote and produced the independent film Went to Coney Island on a Mission from God... Be Back by Five.

Although Cryer gained fame with his early film roles, it took several years to find success on television. In 2003, Cryer was cast as Alan Harper on the CBS sitcom Two and a Half Men, for which he won two Primetime Emmy Awards in 2009 and 2012. Cryer received a star on the Hollywood Walk of Fame for Television in 2011.

After appearing on the podcast Crime Writers On... it was announced Cryer is joining the team at the Undisclosed podcast for their second season.

Cryer was born in New York City, New York. His mother, Gretchen Cryer (née Kiger; * 1935), is a playwright, songwriter, actress and singer. His father, Donald David Cryer (born 1936), is an actor and singer who originally studied to be a minister.

When Cryer was twelve years old, he decided that he wanted to become an actor. When his mother heard this, she thought he should have a backup plan, and joked: "Plumbing is a pretty good career." Cryer attended Stagedoor Manor Performing Arts Training Center for several summers as a teenager, and is a 1983 graduate of the Bronx High School of Science. He was classmates with screenwriter and film director Boaz Yakin. Cryer skipped college and went to the Royal Academy of Dramatic Art in London, United Kingdom for a summer short course in Shakespeare. 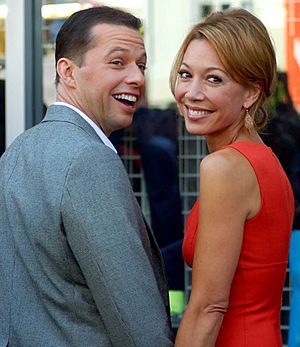 Cryer married British actress Sarah Trigger in 1999, with whom he has a son, Charlie Austin. The pair divorced in 2004. In February 2007, on an episode of The Tonight Show with Jay Leno, he announced that he would marry entertainment reporter Lisa Joyner; the couple married in Mexico in June 2007. On September 29, 2009, Cryer and Joyner announced that they adopted a baby girl.

When Pretty in Pink co-star Molly Ringwald told Out magazine in 2012 that she believed Cryer's character was gay, Cryer defended Duckie and other "slightly effeminate dorks," and said he has had to live with others' "faulty" gaydar. Also in 2012, Joyner told Jeff Probst that when she and Cryer started dating, she wondered if he might be gay. Cryer was asked in 2014 if he was "mistaken for gay"; he again called himself "an effeminate heterosexual dork".

All content from Kiddle encyclopedia articles (including the article images and facts) can be freely used under Attribution-ShareAlike license, unless stated otherwise. Cite this article:
Jon Cryer Facts for Kids. Kiddle Encyclopedia.