Kids Encyclopedia Facts
Not to be confused with Lindenwold, New Jersey.

Linden was originally formed as a township on March 4, 1861 from portions of Elizabeth, Rahway and Union Township. Portions of the township were taken to form Cranford (March 14, 1871), Linden Borough (March 30, 1882) and Roselle (December 20, 1894). Linden was incorporated as a city by an act of the New Jersey Legislature on January 1, 1925, replacing both Linden Township and Linden Borough, based on the results of a referendum held on November 8, 1923. The city's name derives from linden trees brought from Germany. 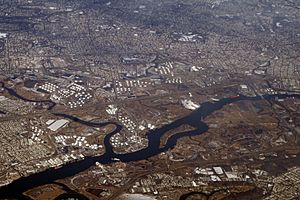 Linden is a regional hub of Polish immigration and features a significant number of establishments featuring the food and culture of Poland. 13.1% of residents are of Polish origin and 15.6% of its residents five years old and above in the center of the city of Linden primarily speak the Polish language at home. The Skulski Art Gallery of the Polish Cultural Foundation of neighboring Clark has exhibited Linden-based artists. Polish-American grocery specialty shop Pulaski Meats takes up nearly a city block. Polish language services are held at two Roman Catholic churches, including at the heavily Polish parish St. Theresa of the Child Jesus Roman Catholic Church, established in the 1920s.

Linden is served by U.S. Route 1/9 and Route 27. In terms of limited access roads, the Garden State Parkway passes about 500 feet west of the city limits. The city is also the western terminus of Interstate 278, which travels through all five boroughs of New York City. The New Jersey Turnpike (Interstate 95) passes through the eastern portion of the city, with a few ramps that lead to the nearest exit (Exit 13 for I-278) which is right on the city limits with nearby Elizabeth.

Local public transportation is provided by NJ Transit with bus service to Elizabeth, Perth Amboy and Newark. New Jersey Transit routes 112 and 115 provide local service and interstate service to the Port Authority Bus Terminal in Midtown Manhattan, on the 62 and 94 routes to Newark, and local service on the 56 and 57 routes.

Linden Airport is a small general aviation facility and reliever airport located on the eastern side of the city along U.S. Route 1/9. The airport was constructed for the United States Navy in 1942 for use in development and testing of the Grumman F4F Wildcat and was taken over by the City of Linden after World War II. Newark Liberty International Airport is approximately 15 minutes away.

Linden was chosen as the primary filming location for Volume 2 of the streetball video series, AND1 Mixtapes. One of the original five streetballers to sign with AND1, Waliyy Dixon, a Linden native who also goes by the nickname "Main Event," helped host a night of basketball at 4th Ward Park that claimed attendance by 2,000 spectators.

Several scenes from the 2008 Mickey Rourke film The Wrestler, later nominated for several Academy Awards, were filmed in Linden.

Hal Linden, the stage and screen actor, television director and musician best known as the star of the TV series Barney Miller, based his stage name on the city's name, after seeing the word "Linden" on a water tower while heading to from Philadelphia to perform in New York City.

The east side of Linden is located along the Arthur Kill, a navigable strait which plays an important role in bulk cargo transportation in the Port of New York and New Jersey.

Together with Elizabeth, Linden is home to the Bayway Refinery, a Phillips 66 refining facility that helps supply petroleum-based products to the New York/New Jersey area, producing approximately 230,000 barrels per day (37,000 m3/d), making it the second-largest on the East Coast of the United States and one of the country's 25 largest facilities.

From 1937 to 2005, Linden was home to Linden Assembly, a General Motors manufacturing plant that produced Oldsmobile, Pontiac, Buick and other GM automobiles, but also produced planes during World War II. By early 2008 most of the plant has been torn down for redevelopment by Duke Realty Corporation, which purchased the 100 acres (40 ha) site for $76.5 million.

Saints Mary and Elizabeth Academy was a Catholic school serving students in Pre-K through 8th grade that operated under the auspices of the Roman Catholic Archdiocese of Newark until its closure at the end of the 2013–14 school year due to declining enrollment.

People who were born in, residents of, or otherwise closely associated with Linden include:

All content from Kiddle encyclopedia articles (including the article images and facts) can be freely used under Attribution-ShareAlike license, unless stated otherwise. Cite this article:
Linden, New Jersey Facts for Kids. Kiddle Encyclopedia.