The Arthur Kill (sometimes referred to as the Staten Island Sound) is a tidal strait between Staten Island (also known as Richmond County), New York and Union and Middlesex county, New Jersey in the United States. It is a major navigational channel of the Port of New York and New Jersey.

The name Arthur Kill is an anglicization of the Dutch language achter kill meaning back channel, which would refer to its location "behind" Staten Island and has its roots in the early 17th century during the Dutch colonial era when the region was part of New Netherland. Placenaming by early explorers and settlers during the era often referred to a location in reference to other places, its shape, its topography, and other geographic qualities. Kill comes from the Middle Dutch word kille, meaning riverbed, water channel, or stream. The area around the Newark Bay was called Achter Kol. During the British colonial era the bay was known as Cull bay. The bay lies behind Bergen Hill, the emerging ridge of the Hudson Palisades which begins on Bergen Neck, the peninsula between it and the Upper New York Bay. The sister channel of Arthur Kill, Kill van Kull refers to the waterway that flows from the col or ridge or passage to the interior and translates as channel from the pass or ridge. 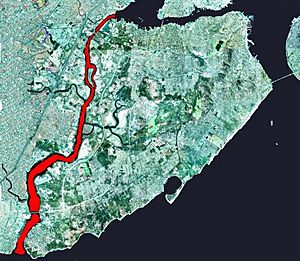 Shown in red, between New Jersey and Staten Island, Arthur Kill connects Raritan Bay on the south with Newark Bay on the north

The channel is approximately 10 miles (16 km) long and connects Raritan Bay on its south end with Newark Bay on the north. Along the New Jersey side it is primarily lined with industrial sites, part of which is called the Chemical Coast. The Staten Island side is primarily lined with salt marshes and is home to the Staten Island boat graveyard. It creates a border for Fresh Kills Landfill and Freshkills Park. 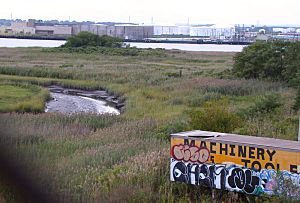 As seen from Staten Island, with Carteret, New Jersey, in the background and small creek in foreground

Arthur Kill is an abandoned river channel carved by an ancestral phase of the Hudson River resulting from the blockage of the main channel of the Hudson at the Narrows by moraine or an ice dam. The size of Arthur Kill channel is large, suggesting that it was, for a time, the primary drainage from the region. However, it could not have been primary drainage for long because the river did not have enough time to carve a broad flood plain.

Because of the complex nature of the tides in New York-New Jersey Harbor Estuary near the mouth of the Hudson River, the hydrology of Arthur Kill is still an open subject. In particular, the net flow of the channel is not well established. It was heavily polluted in the 1960s and 1970s, with few fish species able to live in it. Since the 1990s, crabs, baitfish, striped bass and bluefish have returned to this water.

It contains two small uninhabited islands, Prall's Island and the Isle of Meadows, both of which are part of the borough of Staten Island. John's Cove is located near its northern end in New Jersey. On the New Jersey side the Elizabeth River, Rahway River, Morses Creek Piles Creek flow into the kill. The Passaic River and Hackensack River mouth at Newark Bay. On the Staten Island side Old Place Creek, Fresh Kills (an estuary fed by the Richmond Creek and Main Creek and part of Freshkills Park), Bridge Creek (off Goethal Pond), Old Place Creek, and Sawmill Creek flow into the strait. 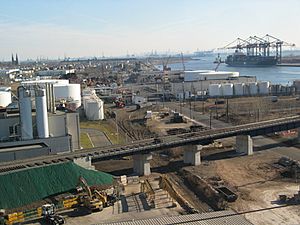 A heavily used marine channel, it provides access for ocean-going tankers to industrial facilities along the channel itself. The Howland Hook Marine Terminal is located at its mouth at Newark Bay. It provided the primary marine access to the now-closed Fresh Kills Landfill on Staten Island and is the location of the Staten Island boat graveyard.

The channel is dredged periodically to a depth of 35 to 37 feet (10.7 to 11.3 m) and a width of 600 feet (180 m) to maintain its usefulness for commercial ship passage. As part of its Harboring Deepening Project, the Kill is being deepened to a depth of 50 feet (15 m) to accommodate larger ships and allow for their passage while carrying full loads. 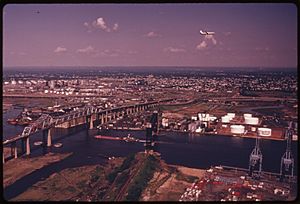 Arthur Kill is spanned by the Goethals Bridge and the Outerbridge Crossing, as well as by the Arthur Kill Vertical Lift Bridge, a railroad bridge and the largest bridge of its type in the United States.

For many years the Kill was traversed by a ferry between Tottenville and the Perth Amboy Ferry Slip. Another ferry ran from the tip of Victory Boulevard in Travis to Carteret. Re-introduction ferry service between Carteret's Waterfront Park and Midtown Manhattan via Arthur Kill and Kill van Kull is planned. As of 2021, funding for the construction of a landing dock and purchase of a boat was in place.

The Arthur Kill was a critical dividing line during the American Revolution, with the British holding Staten Island for the duration of the conflict while New Jersey remained largely in Continental hands. Numerous skirmishes, including the Battle of Staten Island, spanned the Arthur Kill.

As of 2017[update], the likelihood of the planned Pilgrim Pipeline, to pipe crude oil, kerosene, and diesel fuel through New York and New Jersey, is not known, but it is expected to terminate at the Linden side of the kill. 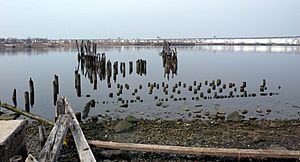 All content from Kiddle encyclopedia articles (including the article images and facts) can be freely used under Attribution-ShareAlike license, unless stated otherwise. Cite this article:
Arthur Kill Facts for Kids. Kiddle Encyclopedia.