The Outerbridge Crossing is a cantilever bridge which spans the Arthur Kill. The "Outerbridge", as it is often known, connects Perth Amboy, New Jersey, with Staten Island, New York. It carries NY 440 and NJ 440, the two roads connecting at the state border near the bridge's center. The Outerbridge Crossing is one of three vehicular bridges connecting New Jersey with Staten Island, and like the others, is maintained and operated by the Port Authority of New York and New Jersey. The others are the Bayonne Bridge (which also carries NJ 440 and NY 440), which connects Staten Island with Bayonne, and the Goethals Bridge, which connects the island with Elizabeth. 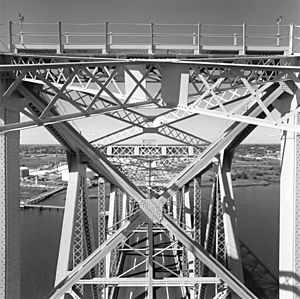 View from top of tower through truss work

The bridge was named for Eugenius Harvey Outerbridge, the first chairman of the then-Port of New York Authority and a resident of Staten Island. Rather than call it the "Outerbridge Bridge", the span was labeled a "crossing", but many New Yorkers and others mistakenly assume the name comes from the fact that it is the most remote bridge in New York City and the southernmost crossing in New York state.

The bridge is of a steel cantilever construction, designed by John Alexander Low Waddell and built under the auspices of the Port of New York Authority, now the Port Authority of New York and New Jersey, which currently operates it. It opened simultaneously with the Goethals Bridge on June 29, 1928. Both spans have similar designs. Neither bridge saw high traffic counts until the opening of the Verrazano-Narrows Bridge in 1964. Traffic counts on both bridges were also depressed due to the effects of the Great Depression and World War II.

In recent years, the bridge has undergone numerous repair jobs as a result of the high volume of traffic that crosses the bridge each day. On October 11, 2013, the Port Authority announced the completion of the bridge's repaving project.

On March 2, 2017, Port Authority Executive Director Patrick Foye announced the funding of a $230 million study into a potential replacement bridge.

All content from Kiddle encyclopedia articles (including the article images and facts) can be freely used under Attribution-ShareAlike license, unless stated otherwise. Cite this article:
Outerbridge Crossing Facts for Kids. Kiddle Encyclopedia.