Freshkills Park is a public park being built atop a former landfill on Staten Island. At about 2,200 acres (8.9 km2), it will be the largest park developed in New York City since the 19th century. Its construction began in October 2008 and is slated to continue in phases for at least 30 years. When fully developed by 2035–37, Freshkills Park will be the second-largest park in New York City and almost three times the size of Central Park in Manhattan. The park is envisioned as a regional destination that integrates 2,200 acres of open grasslands, waterways and engineered structures into one cohesive and dynamic unit that will host a variety of public spaces and facilities for social, cultural and physical activity, learning and play. Sections of the park will be connected by a circulation system for vehicles and a network of paths for bicyclists and pedestrians. The New York City Department of Parks and Recreation (NYC Parks) is managing the project with the New York City Department of Sanitation.

The landfill opened in 1948 in what was then a salt marsh in a rural agricultural area. The subsoil was clay, with a layer of sand and silt on top. There were tidal wetlands, forests, and freshwater wetlands. The area was considered prime for development because the value of wetlands in buffering storm surges and filtering water was not understood at the time.

The initial plan was to raise the elevation of the land by filling for three years and then redevelop it as a multi-use area with residential, recreational, and industrial components. However, three years turned into fifty years. NYC’s population was growing and generating more garbage and it was easy to expand the filling operation on Staten Island, especially for people living in the other four boroughs.  The landfill accepted garbage from 1948 through 2001.  By 1955, the landfill was the largest in the world. At the peak of its operation, the contents of twenty barges – each carrying 650 tons of garbage – were added to the site every day. Staten Islanders tried many times to close operations at the landfill and were finally successful in 1996 when regulations were passed to close the landfill by 2001.

In 2001 it was estimated that, if kept open, the landfill would have eventually become the highest point on the East Coast. Under strong community pressure and with support of the United States Environmental Protection Agency (EPA), the landfill site was closed on March 22, 2001, but it had to be reopened after the September 11 attacks on the World Trade Center in Manhattan. Virtually all the materials from the World Trade Center site were sent to the temporarily reopened landfill for examination. Thousands of detectives and forensic evidence specialists worked for over 1.7 million hours at Fresh Kills Landfill to try to recover the remains of people killed in the attacks. A final count of 4,257 human remains were recovered; the City's Chief Medical Examiner retains custody of all still-unidentified materials at a facility within the National 9/11 Memorial in Manhattan.  The remaining materials at Fresh Kills were then buried in a 40-acre (160,000 m2) portion of the landfill that will be known as West Mound.  Afterward, the landfill facility was closed permanently, in anticipation of the park on the site.

In 2001, the New York City Department of City Planning (NYCDCP) held an international design competition following the release of a Request for Proposal (RFP)      for a landscape architecture firm to develop a master plan for the park. The competition's first round was open to all participants, and in August 2001, six landscape architecture proposals were chosen as finalists. These proposals came from: James Corner Field Operations, Hargreaves Associates, Mathur/da Cunha, Tom Leader Studio, John McAslan + Partners, RIOS Associates, Inc., and Sasaki Associates.

In 2003, James Corner Field Operations was selected as the winner of the competition and was hired to prepare a draft master plan to guide long-term development of the Park. The Draft Master Plan was prepared over the following years and released in March 2006.

In 2006, NYC Parks became the lead agency overseeing the park development process.  In 2011, the Land Art Generator Initiative announced Freshkills Park as the site for a design competition, LAGI-NYC 2012. Although construction of the winning design was not guaranteed, the initiative hoped to bring international attention to the aesthetic potential of renewable energy infrastructure. 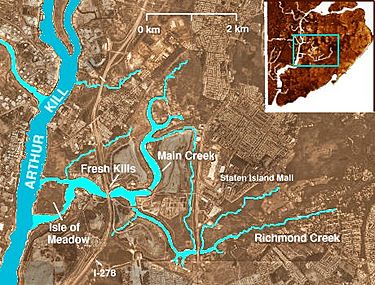 The Freshkills Park site from above

The 2006 Draft Master Plan for Freshkills Park envisioned the site as five parks in one, each with a distinct character and programming approach. The Plan was developed with input gathered in meetings and workshops between the project team and Staten Islanders, nonprofit groups, and government officials. Goals emerging from the outreach efforts included: roads to ease traffic congestion surrounding the Freshkills Park site; active recreational uses such as kayaking, horseback riding, and sports fields; and projects generating and using renewable sources of energy. The planning process also included the input of a community advisory group consisting of local leaders and stakeholders.

The five areas envisioned in the draft plan are described below:

Capital projects entail a complex and lengthy design and permitting process, involving both City and State agencies, to ensure that all landfill infrastructure as well as the developing ecological resources are adequately protected. NYC Parks started park development around the outer edges of the park both to show the City’s commitment to transforming the former landfill to local neighborhoods and because permitting was easier. Those projects include:

In March of 2012, NYC released A Request for Proposals for the construction of solar and/or wind energy facilities. The project for the construction of solar arrays was awarded to SunEdison in November 2013. NYC was in contractual negotiations with SunEdison when the company went bankrupt in 2016. No further work has been done with respect to siting of renewable energy at Freshkills Park since that time.

The Fresh Kills Landfill actively received New York City’s municipal waste from 1947 to 2001. Two of the four mounds at the site – the mounds referred to as North and South – were capped in the late 1990s with an impermeable cover separating waste from the environment. Capping of the East Mound, which will become East Park, began in 2007 and was completed in 2011. Capping of the West Mound began in 2011 and is currently scheduled to be complete in 2022. The Department of Sanitation works with the New York State Department of Environmental Conservation (NYSDEC) to meet regulations for environmentally sound landfill closure; it will also maintain operating responsibility for on–site environmental monitoring and control systems after capping. NYC Parks must also meet NYSDEC’s regulations – no area of the park is permitted to open to public access until it meets state standards for public access.

NYC Parks completed and released the Final Generic Environmental Impact Statement (FGEIS) for the Freshkills Park project in May 2009. The document evaluates the entirety of the proposed project and its likely effects on the neighboring community. In compliance with state and local law, the FGEIS is designed to identify "any adverse environmental effects of proposed actions, assess their significance, and propose measures to eliminate or mitigate significant impacts". A Supplemental Environmental Impact Statement (SEIS) was also completed in October 2009, which specifically focuses on the impact of proposed road construction through the East Park section of the plan and examines alternatives to the current plan.These environmental assessments are updated on a project by project basis, during the design phase, to ensure that any new or undisclosed environmental impacts are also identified and addressed

All content from Kiddle encyclopedia articles (including the article images and facts) can be freely used under Attribution-ShareAlike license, unless stated otherwise. Cite this article:
Freshkills Park Facts for Kids. Kiddle Encyclopedia.